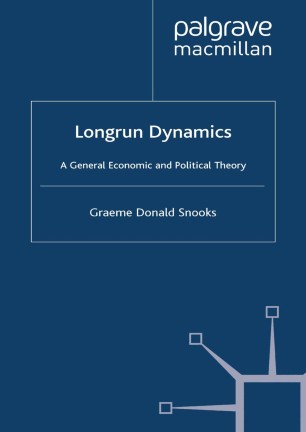 A General Economic and Political Theory

Longrun Dynamics is a ground-breaking work that begins where the author's Economics without Time (1993) left off. It employs the inductive method proposed by J.S.Mill to develop a general dynamic theory that integrates the separate disciplines of economic growth, economic fluctuations, and political decision-making. The central feature of this general theory is dynamic demand, which provides both a realist form for the model and a new explanation of macroeconomics variables. The general theory also provides an entirely new basis for policy and is designed to counter the influence of neo-liberalism in economic theory.

Graeme Donald Snooks is the Coghlan in Economics Professor at the Institute of Advanced Studies at Australian National University.

'Graham Snooks has written a challenging and innovative book. When Keynes wrote The General Theory he explained his controversial and adversarial approach by saying he wanted, in effect, to make a dust, a tactic (or was it a Snooksian strategy?) with which many disagreed. In retrospect surely Keynes was correct? In any event Professor Snooks is firmly in this tradition too. His dissatisfaction with both neoclassical growth theory and evolutionary theory has led him to propose his own modern version of the historical dynamics. Mill recognised that this was needed but was never able to supply this himself partly because this was not his comparative advantage. Snooks, an eminent historian as well as economist, has developed a theory which embraces economic analysis, historical experience, institutional formation and political and policy implications. He introduces a new set of concepts of which strategy, both of people and of nations, is the most important and novel. And he tests the implications of his new approach against both historical evidence and the evidence and the inferences of rival theories. He believes his approach is winning, though he cheerfully admits that only time will tell. Certainly, his book deserves to be read seriously by the profession if only for the irritation it may cause, so that rival oysters may be stimulated to produce alternative pearls.' - G.C. Harcourt, Jesus College, Cambridge

'Graeme Snooks has made the longrun his domain. No other historical economist has such a depth of vision, or so strong an urge to find comprehensive explanations of processes of economic development. His approach is closest to that of Schumpeter. It emphasises dynamic forces that have led to successive swings of economic change. He sees 'strategic demand' as the engine of progress, and rejects the emphasis on static problems, microeconomic efficiency, and supply-side forces that he finds in neoclassical analysis, in evolutionary and institutional economics, and in public choice theory. Snooks attacks the 'stability cult' which now characterises official policy. Its pursuit balanced budgets and zero inflation has broken the momentum of growth and created high unemployment instead he advocates interventionist activism and toleration of moderate levels of 'strategic inflation', with a policy of 'strategic leadership' which gives top priority to raising GDP per capita.' - Angus Maddison, University of Groningen

'Professor Snooks' objectives are to identify those primary forces which have driven economic life in the longrun and to lay the foundations for a macroeconomic model capable of explaining the data. The book certainly challenges the prevailing wisdom in macroeconomics ....Longrun Dynamics makes an important contribution. It offers a new perspective in economic history and economics.' - George Messinis, Economic Record