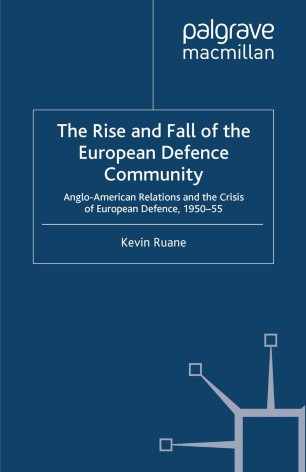 The Rise and Fall of the European Defence Community

Anglo-American Relations and the Crisis of European Defence, 1950–55

Using the European Defence Community (EDC) as a case-study, this book examines the competing and often conflicting view of the British and American governments towards European integration in the early 1950s. The British, fearing an 'agonizing reappraisal' of the American defence commitment to Europe if the supranational EDC failed, went to great lengths to ensure the success of the scheme. When, despite these efforts, the EDC finally collapsed in August 1954, NATO was plunged into arguably the most severe crisis in its history. The crisis also possessed an Anglo-American dimension, with London and Washington badly divided on how it should be resolved. In the end, the British were instrumental in the creation of the Western European Union as a successor to the EDC. Their crisis management, however, had been rooted in fear of the 'agonizing reappraisal', a danger dismissed by many historians as exaggerated but which the British, in 1954, were perhaps right to take seriously.

'... an impressively researched and cogently argued study of the ill-fated treaty to establish a European Defense Community at the apex of the Cold War. No student of international history, nor observer of contemporary international politics, can afford to overlook this book.' - Professor Richard H. Immerman, Temple University, USA

'Kevin Ruane's book is a well-written and forcefully argued account of the British role in the rise and fall of the European Defense Community ... a first-class work of historical writing.' - Professor Thomas A. Schwartz, Vanderbilt University, USA

'Kevin Ruane's study of the crisis surrounding European Defence arrangements in the early 1950s makes an important contribution to our understanding of the Anglo-American relations and of British attitudes towards the early stages of European integration.' - Dr David Dutton, University of Liverpool

'This is a book well worth reading for both specialists and those with a more general interest...' - John W. Coogan, Albion