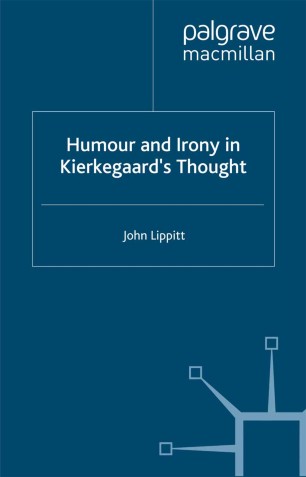 Humour and Irony in Kierkegaard’s Thought

Climacus and the Comic

Irony, humour and the comic play vital yet under-appreciated roles in Kierkegaard's thought. Focusing upon the Concluding Unscientific Postscript, this book investigates these roles, relating irony and humour as forms of the comic to central Kierkegaardian themes. How does the comic function as a form of 'indirect communication'? What roles can irony and humour play in the infamous Kierkegaardian 'leap'? Do certain forms of wisdom depend upon possessing a sense of humour? And is such a sense of humour thus a genuine virtue?

John Lippitt is Senior Lecturer in Philosophy, University of Hertfordshire.

'John Lippitt's original and polished study brings into focus a crucial but massively neglected concept in Kierkegaard's work: humour. Kierkegaard himself is clear enough about its importance, but it has been largely ignored by both philosophical and theological commentators, mesmerized perhaps by the image of Kierkegaard as 'the melancholy Dane'. But Lippitt not only restores an essential feature to our picture of Kierkegaard, he also shows that Kierkegaard can contribute to our understanding of humour, and that humour is itself philosophically interesting and helpful. His discussion and examples are far-ranging, making this essential reading not only for Kierkegaard specialists but for all who are interested in understanding humanity's distinctive capacity for laughter.' - George Pattison, King's College, Cambridge

'Kierkegaard famously urged his readers to respect the autonomy of his pseudonyms. John Lippitt's clear, elegant and carefully argued reading of the Concluding Unscientific Postscript illustrates the benefits of taking this advice seriously. Lippitt connects Johannes Climacus' repeated claim to be a humorist with Stanley Cavell's understanding of moral perfectionism, and thereby opens up an original and powerful interpretation of Kierkegaard's conception of religious belief, and of the more general ethical significance of humour. No future discussion of these matters can afford to ignore Lippitt's claims.' - Stephen Mulhall, New College, Oxford

'This is at once a profoundly lucid and compelling reading of the Concluding Unscientific Postscript and a significant meditation on the ethical themes of exemplarity and perfectionism central to post-Kantian moral philosophy. Written in Lippitt's characteristically accessible and engaging prose, this study demonstrates the centrality of humour to Kierkegaard's understanding of philosophy as an ethical practice - and, thereby, situates Kierkegaard's work in an ethical tradition of philosophy which extends from Socrates to Wittgenstein by way of Montaigne and Nietzsche. This book will be essential reading not only for Kierkegaard scholars but also for all concerned with the ethical character of philosophy.' - David Owen, University of Southampton

'Lippit makes intriguing new connections between the comic and other Kierkegaardian themes...I find this a fascinating book...bold in its engagements with disputed aspects of Kierkegaard exegesis, and ambitious (and successful) in its attempt to develop wider perspectives on the relevance of the comic to both the ethical and religious life in general.' - M. Jamie Ferreira, Theologische Literaturzeitung

'This [is] a well written, particularly lucid, eminently relevant and often illuminating book from an author who appears very well qualified to write it, being well-versed in both the philosophy of humour and in the study of Kierkegaard's writings.' - M.Ray, Heythrop Journal

'[I]t does not simply provoke us to argue with it in its own terms but also to engage more deeply with the questions and issues that it addresses...[T]hese questions and issues are of central importance and given...relaively little explicit or sustained attention...in the secondary literature...[T]he relevance of Lippitt's book will therefore be of long-term interest to Kierkegaard scholars...my guess is that it will be of similar long-term interest to philosophers interested in the question of humour...Lippitt's book...has a nice lightness of touch suitable to its topic - and one, I think, that could be enulated in philosophical discussions on very different subjects.' - George Pattison, Soren Kierkegaard Newsletter