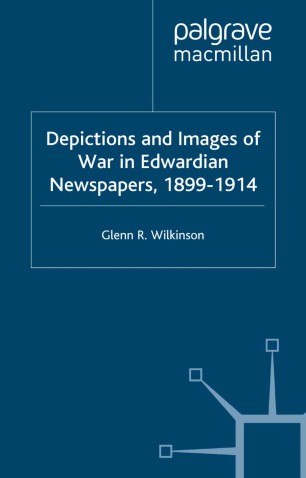 Depictions and Images of War in Edwardian Newspapers, 1899–1914

Through a detailed examination of newspaper coverage from 1899-1914, this book seeks to understand the vicarious experience of warfare held by Edwardians at the outset of the First World War. The attitudes towards and perceptions of war held by those who participated in it or encouraged others to do so, are crucial to our understanding of the origins of the First World War. Taking into account media history, cultural studies and military history, Wilkinson argues that the press depicted war as distant and safe; beneficial and desirable and even as some kind of sport or game. We are cautioned to avoid the same misconceptions of war in our own contemporary discussions of armed conflict.

GLENN R. WILKINSON is an instructor in the Humanities Department of Mount Royal College in Calgary, Alberta, Canada where he teaches European and Intellectual History. He has written several articles on images of war in newspapers.

'[It] explores the images of soldiers and of warfare prevalent in British newspapers before the First World War. It is a sobering account of a society blind to the chaotic waste and suffering of military conflict, which is rendered more poignant by current events, and by Glenn R. Wilkinson's observation that today we too possess a woefully unrealistic image of warfare...How did this blindness come about? Wilkinson is too sophisticated to regard it as forced upon Edwardian society, rejecting notions of propaganda, and observing that commercial mass-circulation newspapers cannot achieve such results without the willing consent of readers...This monograph - conceived in the aftermath of the Gulf War, and completed in the shadow of the September 11 attacks - suggests instead that the Edwardians gazed too long at war and considered it too little. They watched the images of war brought to them by the media, but did little to prevent its advance, until it was so deeply ingrained in their culture that it could no longer be either questioned or challenged. In this way, Wilkinson concludes bleakly, we are no different from our Edwardian ancestors.' - Nicholas Hiley, Times Literary Supplement

'Wilkinson is able to shed considerable light on how the British viewed war during the generation before they were required to support and make sense of the Great War...Wilkinson's nuanced descriptions of numerous papers deserve high praise, as does his labour-intensive methodology and engaging style. His arguments, moreover, add a valuable window into Edwardian cultural history...this is a significant work of cultural history that does much to explain the disillusionment of those soldiers who found the reality of the Great War very different from the images on which they had been raised.' - Mark Hampton, Wesleyan College, Twentieth Century British History