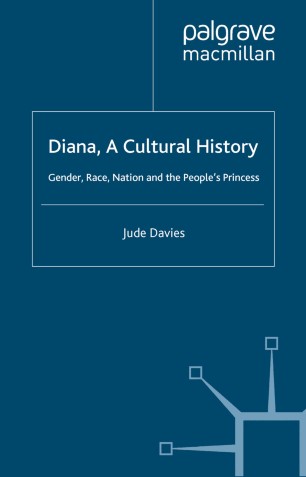 This book intervenes in debates over the significance of Diana, Princess of Wales by offering a critical account of her media iconicity from 1981 to the present. It outlines the historical development of representations of Diana, analysing the ways in which the Princess has been understood via discourses of gender, sexuality, race, economic class, the royal, national identity, and the human. The book then goes on to assess the issues at stake in debates over the 'meaning' of Diana, such as the gender politics of cultural icon-making and deconstruction, and conflicting notions of cultural value.

JUDE DAVIES is a Senior Lecturer in the School of Cultural Studies at King Alfred's College, Winchester. He has published articles on various elements of contemporary culture, and on American literature

'Unlike so much recent writing on Princess Diana, Jude Davies' book is based

on in-depth research that long predated Diana's death. He was written a

wide-ranging, sophisticated and historically well-grounded study of the web

of representations that surrounded Diana, and their complex cultural and

political resonances. The book is an important contribution to the growing

debate on what it means for monarchy to be mediated.' - Dr Nick Couldry,

Lecturer in Media and Communications,The London School of Economics and Political Science

'Just when we thought there was nothing left to be said about the representation of Diana, Princess of Wales, along comes this substantial book by Jude Davies. The product of an impressive amount of research, Davies teases apart assumptions not only about Diana, but also about the place and process of cultural theorising, particularly in relation to the consequences for our sense of self of postmodern icons. This book will surely convert those who still doubt the historical and cultural significance of Diana, and be a fantastic resource for others doughty enough to take on some of Davies' challenges: What questions about femininity, race, privilege and nationhood arise from a detailed, critical assessment of the Diana-as-icon? In what senses might 'the Diana effect' be said to have induced the 'New Britain' of the late twentieth century? How far did the phenomenon of Diana emerge at a pivotal moment in British history, and how far was the effect transformative? Davies' book instates the study of the representation of Diana within the heart of cultural studies, and will be much used, and much quoted in future work in the field.' - Ann Kaloski-Naylor, Lecturer, Centre for Women's Studies, University of York