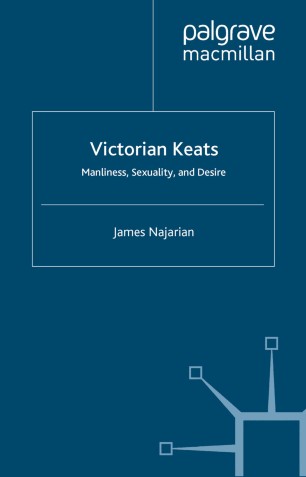 This book explores the sexual implications of reading Keats. Keats was lambasted by critics throughout the nineteenth century for his sensuousness and his 'effeminacy'. The Victorians simultaneously identified with, imitated, and distrusted the 'unmanly' poet. Writers, among them Alfred Lord Tennyson, Matthew Arnold, Gerard Manley Hopkins, John Addington Symonds, Walter Pater, and Wilfred Owen came to terms with Keats's work by creating out of the 'effeminate' poet a sexual and literary ally.

'How do you love a poet? With this marvellous and deceptively simple question James Najarian launches his study of the male poets who, in the century following Keats's tragic death, made from Keats's words and life story their own homophilic poetics and affiliative literary histories. Insistently and elegantly literary, the readings are both brilliant and warmly sympathetic. They show how same-sex love can serve across time not just as a principle of social relations or sexual practice, but as a generative category of literary self-definition. Victorian Keats should be read by anyone interested in histories of sexuality as well as by those who care about literature's use and reception.' - Margaret Homans, Professor of English and of Women's & Gender Studies, Yale University

'Here is the book on Keats I have been waiting for - a critical study I can heartily recommend to lovers of Keats, to connoisseurs of Victorian nuance, to readers captivated by queer ghostings. James Najarian, in clear prose, proves himself a fine interpreter of the long shadow that Keats cast on the verse of his unwitting followers. Victorian Keats, sensitively delving into homoerotic undermeanings, never loses sight of beauty, and always remembers that poetic failure can be as compelling - as demonstrative - as poetic success.' - Wayne Koestenbaum, Professor of English, CUNY Graduate Center