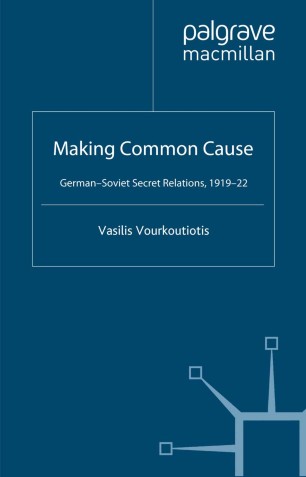 Using German and previously closed or underutilized Soviet archives, this work brings to date the historiography of one of the most important aspects of twentieth-century international relations: the steps by which Germany and Soviet Russia would find common ground and establish a relationship whose impact would be felt throughout World War II.

VASILIS VOURKOUTIOTIS completed his PhD at McGill University, and taught History and International Relations in Russian universities for three years, before taking up his current appointment as Assistant Professor of History at the University of Ottawa, Canada. He is the author of Prisoners of War and German High Command: the British and American Experience (Palgrave, 2003), and has contributed to several books and published in academic journals in Canada, the United States, Great Britain, Germany and Russia. He is also a Post Doctoral Scholar at the Université de Paris IV -Sorbonne, and Fellow of the Royal Historical Society.

'This work fills a gap in the existing literature as it deals less with the details of the Treaty of Rapallo (although these are obviously covered) and more with the secret negotiations that laid the basis for the treaty. It successfully achieves what it sets out to do, that is to demonstrate that secret and significant contacts between Germany and Soviet Russia occurred before 1920 (the date previously assumed to be the starting point for these negotiations)...This is a well written book that offers much detail about a fascinating period in European history. It is well argued and questions some of the more usual assumptions made about Rapallo.' - Jonathan Davis, Europe-Asia Studies