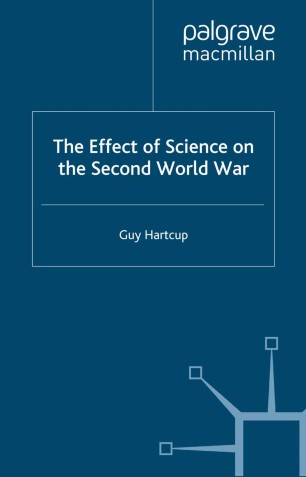 The Effect of Science on the Second World War

The latest advances in science were fully exploited in the Second World War. They included radar, sonar, improved radio, methods of reducing disease, primitive computers, the new science of operational research and, finally, the atomic bomb, necessarily developed like all wartime technology in a remarkably short time. Such progress would have been impossible without the cooperation of Allied scientists with the military. The Axis powers' failure to recognise this was a major factor in their defeat.

GUY HARTCUP served in the British and Indian Armies 1939-45 after which he took an Honours Degree at Cambridge in 1947. From 1948-60 we worked as an Historian in the Air Historical Branch of the Air Ministry. He then became an English editor with the International Atomic Energy Agency in Vienna from 1961-2. After returning to England the author was an Assistant Historian in the Cabinet Office Historical Section and, finally, was Historian in the Treasury from 1965-76. His books include Code Name Mulberry: the Planning, Building and Operation of the Normandy Harbours; Camouflage: a History of Concealment and Deception in War; Cockroft and the Atom (with
T. E. Allibone); The War in Invention: Scientific Developments, 1914-18; The Silent Revolution: Development of Conventional Weapons, 1945-85; Operational Research in the RAF; and The Challenge of War: Scientific and Engineering Contributions to World War Two.