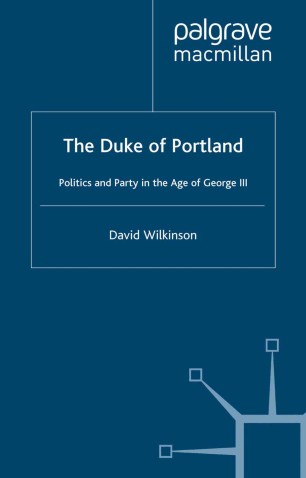 The Duke of Portland

Politics and Party in the Age of George III

The Third Duke of Portland served twice as Prime Minster and had a long and distinguished political career from 1760s to the 1780s. This study details how he was transformed from a pillar of the grand Whiggery (he was the brother-in-law of Georgiana, Duchess of Devonshire) into the figurehead for would-be Tories. The book also examines how he played an important public role in many of the political crises of his era (including the French Revolution and the Union) as well as a hidden role in British history (he was involved in the secret service and political corruption).

DAVID WILKINSON is a Lecturer in history in the Faculty of Continuing Education, Birkbeck College, University of London.

'This is the first, much needed, biography of the Duke, whose political career spanned most of George III's reign and who was home secretary during the crisis of the French Revolution and twice head of the government. In his well-crafted study David Wilkinson manages successfully to portray the personality of the man as well as clarifying his political significance as statesman and party leader.' - Michael Duffy, University of Exeter, UK

'This is a carefully researched and interesting study of a man who twice headed a ministry in the course of a long career, but has been unduly neglected since. If fills convincingly a suprising gap.' - John Ehrman