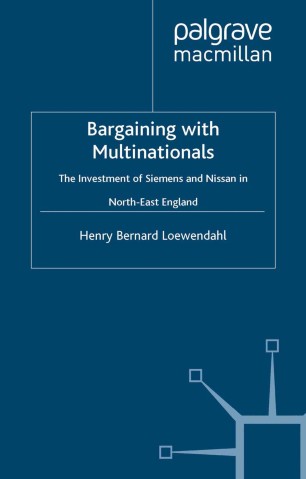 The Investment of Siemens and Nissan in North-East England

In Bargaining with Multinationals , Loewendahl scrutinises the relationship between multinational companies, regional development and governments, using an international political economy framework of bargaining between government and multinationals. He critically analyses the role of foreign investment in economic development, and examines how governments can link inward investment to regional economic development. Based on extensive use of data, interviews and case studies of Siemens and Nissan's UK investment, the book shows why MNCs have invested in the UK in the past, how they bargained with the government, and what the impact was on the national and regional economies. In particular, through linking the strategy of multinationals to the location advantages of the UK, it is argued that labour flexibility and incentives were crucial to investment decisions. Loewendahl recommends a framework to integrate endogenous and exogenous approaches to developments; and proposes a greater role for the region and the EU to control incentives and monitor multinationals.

HENRY LOEWENDAHL is a Strategy Consultant at PricewaterhouseCoopers, where he advises governments across the world on attracting inward investment and multinational companies on where to locate their international investment. After completing a Masters degree in International Political Economy at the University of Warwick, Henry won a scholarship from Volkswagen to study for a PhD at the Institute for German Studies, University of Birmingham. He has published papers in the area of German and Japanese corporate strategy and foreign investment in Turkey and Eastern Europe.