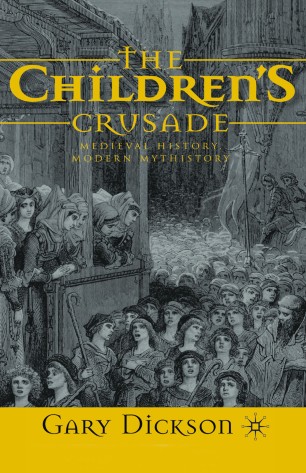 The Children's Crusade was possibly the most extraordinary event in the history of the crusades. The first modern study in English of this popular crusade sheds new light on its history and offers new perspectives on its supposedly dismal outcome. Its richly re-imagined history and mythistory is explored from the thirteenth century to present day.

GARY DICKSON is a Californian who has lived much of his life in Scotland. A graduate of Stanford and Yale, he received his Ph.D. from the University of Edinburgh, where he taught medieval history before becoming an Honorary Fellow. He gave the Wilde Lectures in Natural and Comparative Religion at the University of Oxford and was a Member of the Institute for Advanced Study at Princeton. He served on the Editorial Advisory Board of The Crusades: An Encyclopedia.

'A master historian and crackerjack writer, Dickson chases up the evolution of the 'mythistory' to its earliest records and separates the authentic religious revival from the calamitous conclusion slapped on by chroniclers ignorant or dissatisfied witht the actual result.' - Patrick Madigan, Heythrop Journal

'[This] book is very readable and is sometimes extremely funny. I would not be surprised if it became a classic. It will certainly appeal to a very wide audience...I will be amazed if anything better on the crusades appears in 2008.' - Jonathan Riley-Smith, The Tablet

'..a useful testament to the power of religion.' - Henry Midgley, Bits of News

'Dickson unpacks the story in fascinating detail - and yet, he argues, the facts are only just the start.' - Michael Kerrigan, The Scotsman, Critique

'This is a heartily welcome book...His [Dickson] scholarly insights and close attention to detail are admirable and he delivers his argument with terrific panache.' Norman Housley, Journal of Ecclesiastical History

'This is an outstanding example of scholarship - precise, accessible, and immensely interesting. Never has the strange episode of the Children's Crusade been treated more ably, nor has anyone before now thought so deeply and so wisely, as Gary Dickson has, about its twin status as historical fact and potent myth.' - William Chester Jordan, Dayton-Stockton Professor of History, Princeton University, USA

'The Children's Crusade is an event vaguely familiar to everyone, but whose real nature has been obscured by myth and metaphor. In this book Gary Dickson offers us the first reliable English account of this cataclysmic outpouring of fervor and how it has been transformed, manipulated and misremembered over the last eight centuries. The result is intriguing and bound to be the authoritative study for the foreseeable future.' - Paul Freedman, Chester D. Tripp Professor of History, Yale University, USA

'It is a welcome in-depth study of an underserved topic...If Gary Dickson has, in fact, been seduced by the power of the story, he is in good company' - Ray Conlogue, The Literary Review of Canada

'Gary Dickson has given us a work that is entirely worthy of its subject. In doing so, he has placed the history of the Children's Crusade in a context that will make his work one that all historians will find enriching...Dickson has done a remarkable job of sorting out the Children's Crusade and tracing its afterlife to the present. There is no question that mythistory will continue to trump histoire eventuelle in the popular market, but Dickson has provided an original and profound work that deserves serious study by all historians and wide use in the historiography classes of history majors as well as graduate students.' - James M. Powell, Syracuse University, The Catholic Historical Review

'In this engaging volume...Dickson interrogates the very nature of history-writing...Dickson does not claim certainty, but rather, offers a plausible, well-considered interpretation of the medieval sources...A convincing historian of mythistory, a mythistorian Dickson is not.' - Brett Edward Whalen, University of North Carolina, Institute of Historical Research

'Gary Dickson has written an important book on a difficult topic. We must be grateful to him for doing what others have shunned or failed at, namely producing a comprehensive modern history of the Children's Crusade which will become a standard work and will help us all better to sort history from myth.' Cristoph T. Maier, University of Zurich, Crusades

'With erudition, Dickson has taken the scattered, fragmentary, and often contradictory evidence for the Children's Crusade and produced a rich and compelling narrative.' - Thomas F. Madden, Speculum