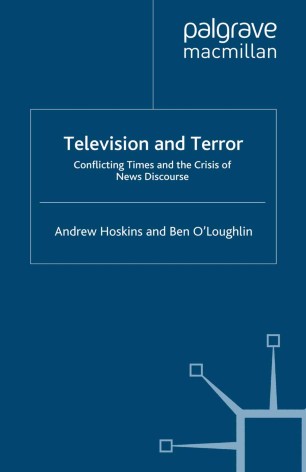 Conflicting Times and the Crisis of News Discourse

The advent of the twenty-first century was marked by a succession of conflicts and catastrophes that demanded unrestrained journalism. Hoskins and O'Loughlin demonstrate that television, tarnished by its economy of liveness and its impositions of immediacy, and brevity, fails to deliver critical and consistent expositions of our conflicting times.

Author Andrew Hoskins: Andrew Hoskins is Director of the Adam Smith Research Foundation. His research focuses on the theoretical and empirical investigation of today s new media ecology and the nature of/challenges for security, and individual, social and cultural memory in this environment. He has an established record of leading externally funded empirical research into the shifting relations between media, war and terrorism, media and radicalisation, and media and memory. His current work explores the relationship between connectivity, risk, and memory.

'... the strength of this book lies in its ability to communicate important ideas from media studies to a broad audience of scholars interested in media discourse... Television and Terror effectively describes how television news, through the mediatization of events, works to constitute the social reality in which we live... In particular, it provides fodder for the argument that television can itself be hijacked as a weapon of terror as television news increasingly mediatizes events that take place in today's world.'