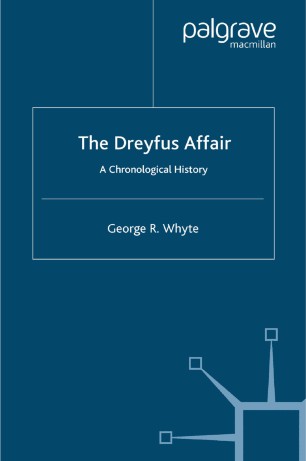 Volume one of a comprehensive series on the Dreyfus Affair, this account chronicles for the first time in English and day by day, the drama that destabilized French society (1894-1906) and reverberated across the world. A deliberate miscarriage of justice, the public degradation of an innocent Jewish officer and his incarceration on Devil's Island, espionage, intrigue, media pressure, vehement antisemitism and political skulduggery - topics so relevant to our times - are set within a broad historical context. Meticulous research, new translations of key documents, a wealth of primary sources and illustrations and a select bibliography make this an indispensable reference work.

GEORGE R. WHYTE is chairman of the Dreyfus Society for Human Rights and the author of The Accused: The Dreyfus Trilogy (1996).

'In this impressive work, George Whyte has assembled in unprecedented detail the evidence surrounding one of the most bitterly contested moments in modern European history. It will become a standard reference work for those interested in this fascinating case.' - Chief Rabbi Prof. Sir Jonathan Sacks

'George Whyte's telling of the famous story is as gripping as a novel. Whyte has enrolled Dreyfus into the elite of cultural icons whose lives are documented day by day and hour by hour. This volume lives and breathes in its footnotes and appendices; hey are he most moving and involving part of the book, fleshing out the bare timeline and reproducing many key documents, a number for the first time in English.' - Ben Barkow, Director, Wiener Library, Jewish Chronicle

'A riveting account of the Deyfus Affair. George R. Whyte meticulously retraces the complex events which allow the reader to follow the unbroken and far-reaching line of the narrative. He records these events within a chronological context which reaches back to the French Revolution and forward to the present day. However, this vaster perspective leads to the inevitable conclusion that even in France, the country of human rights and the first to bestow civil liberties to the Jews, antisemitism, lurking beneath the surface and casting a stain on the name of Dreyfus, remains a constant threat which can erupt again at any time.' - Frankfurter Allgemeine Zeitung

'In his day by day account the author shows that real life events can be more breathtaking than fiction. His innovative style of biographical writing concentrates primarily on relating the facts, thereby inviting readers to arrive at their own conclusions. This work of erudition will serve as an authoritative reference book for any serious student of l'Affair Dreyfus.' - Dr Frederik Wolfgang Rosner, The Renaissance Quarterly

'This book is not only an outstanding work of reference and, as such, makes a valuable contribution to the English language bibliography on the subject, but also a new tool for all French historians studying the Affair.' - His Excellency M. Gérard Errera, French Ambassador to the Court of St. James

'The sad history of the Dreyfus Affair is as relevant in today's battle against racism as it was in the days so uniquely and remarkably set out in George Whyte's new book. It is important both for its meticulous historical accuracy and for the mirror that it holds up to the past, reflecting the grim and growing dangers both of the present and of the future.' - Lord Janner of Braunstone, QC Chairman, Holocaust Educational Trust

'A comprehensive painstaking and thorough documentation of the infamous Dreyfus Affair. The publication of this masterful book comes at a time of increased antisemitism in France in particular and elsewhere in Europe. A much needed reminder of the malaise that almost destroyed Dreyfus and that threatens once again to blight our world.' - Rabbi Barry Marcus, Central Synagogue, London

'This year, France commemorates the Centenary of the rehabilitation of Captain Alfred Dreyfus in 1906. A number of publications have appeared on this occasion, among which I pay particular tribute to that of George Whyte. He has placed at the disposal of the English speaking public a remarkable resource of study and reflection on the immortal Affair. The presentation, strictly chronological, month by month, day by day, makes its reading easy and agreeable. It is enriched by 55 appendices representing an expanded framework of French political life 1789 - 2006. George Whyte takes his talented place in the continuity of the great works on the Dreyfus Affair which appeared in London in 1899; those of G. Barlow, F.C. Conybeare and W.G. Stevens. We thank him profoundly and wish the book all the success it merits.' - Dr Jean-Louis Lévy (Dreyfus), Grandson of Captain Dreyfus