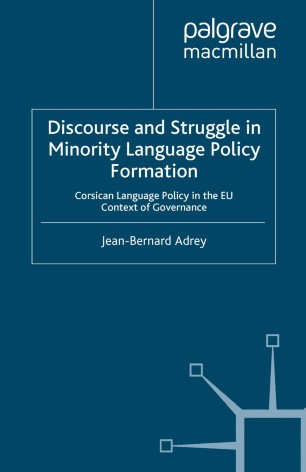 Corsican Language Policy in the EU Context of Governance

The author presents a new approach to the study of language policy, by focusing on language policy formation and implementation as a dynamic, conflict-laden process involving the interaction of various actors with different motivations and uneven bargaining powers, rather than as a product , examinable post hoc from existing language legislation.

Gabrielle Hogan-Brun is Senior Research Fellow at the University of Bristol, UK. Her research fields are migration and multilingualism, language ideologies, language policy, with particular focus on Central and Eastern Europe. Among her publications are the co-authored monograph Language Policies and Practices in the Baltic States, the co-edited books Discourses on Language and Integration: Critical Perspectives on Language Testing Regimes in Europe, and Minority Languages in Europe: Frameworks - Status – Prospects. She is Founding Editor of the book series Palgrave Studies in Minority Languages and Communities, and Co-Editor of the journal Current Issues in Language Planning.