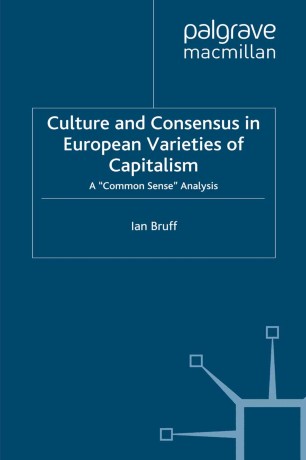 Using two milestones in the Dutch and German political economies - Wassenaar and Alliance for Jobs respectively - this book argues that Antonio Gramsci's 'common sense' provides us with the conceptual apparatus necessary for analysing the integral role played by culture and consensus in the trajectories of national capitalisms in Europe.

IAN BRUFF is Research Officer in the Department of Research and Knowledge Transfer at Edge Hill University, UK. Prior to this he taught and researched at several UK universities and also Trinity College Dublin. He has published on the Netherlands, the globalization debate, and neo-Gramscian theory.

'Ian Bruff brings Gramscian notions of culture and common sense back into the study of national economic performance. In this way, he underscores that policy consensus is what people understand and make of it, and not what institutions thrust upon them. His argument not only extends the reach of neo-gramscian analysis, but offers an important provocation for all comparative political economists.' - Erik Jones, Professor of European Studies, SAIS Bologna Center, Italy

'Drawing on Gramsci, Ian Bruff provides a new definition of culture, which helps us to understand the possibility of consensus formation beyond the focus on institutional norms within the Varieties of Capitalism literature. Conceptually highly innovative and empirically rich, this book is a must read for everyone interested in understanding current restructuring of national political economies.' - Andreas Bieler, Professor of Political Economy, University of Nottingham, UK

'A perceptive and engaging book that is closely argued throughout and that adds a most valuable Gramscian reflection on the concept of consensus to the considerable literature on European varieties of capitalism. This deserves to be widely read.' - Colin Hay, Professor of Political Analysis, University of Sheffield, UK

'I would like to begin this review by making two general comments. One is that doctoral theses rarely make good books...the other is that the original dynamism of the 'varieties of capitalism literature seems lately to have stalled. I begin by stating these things because Ian Bruff's Culture and Consensus...gives the lie to them both.' - Capital & Class

'This book is a very accomplished piece of analysis and a tight, welcome critique of the burgeoning varieties of capitalism (VoC) literatures.' Political Studies Review