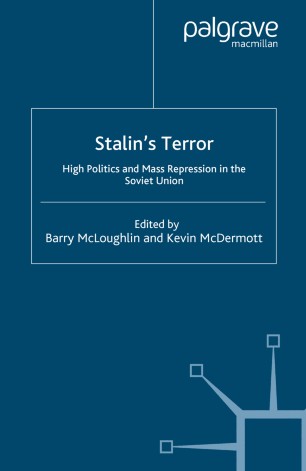 High Politics and Mass Repression in the Soviet Union

The British, Irish, Russian, American, German and Austrian contributors examine the intricate nature of the mass repression unleashed by the Stalinist leader of the USSR during 1937-38. The first part of the collection deals with annihilation policies against the Soviet elite and the Communist International. The second section of the volume looks at mass operations of the secret police (NKVD) against social outcasts, Poles and other 'hostile' ethnic groups. The final section comprises micro-studies about targeted victim groups among the general population.

'A fascinating and wide-ranging collection of essays on the Great Terror. It illustrates well the new archive-based research being undertaken. It significantly extends our knowledge and will be a boon to students and scholars.' - Professor E.A. Rees, EUI, Florence

'Perhaps the greatest untold story of Soviet history...the book is likely to change the way we think about the Great Terror and Stalin's Dictatorship.' - James Harris, Leeds University

'These excellent contributions not only increase our understanding of the events as a whole; they also provide new details that will surprise even some specialists...[Stalin's Terror] provides fresh perspectives and important new factual evidence on one of the most barbaric episodes of the twentieth century, and will benefit anyone interested in modern Russian or European history.' - J. Arch Getty, University of California

'This is an extremely interesting and informative, but at the same time chilling collection of essays detailing the different stages and types of repression in the Soviet Union during the 1930s...The material presented in this collection, which provides fascinating glimpses into the psychology of interrogation and the tragic fate of individuals alongside meticulous analysis of the facts and figures of repression is both comprehensive and ground-breaking in the new perspective it provides on this catastrophic period of Soviet history.' - Elizabeth Warner, Emerita Professor of Russian, University of Durham, Mortality