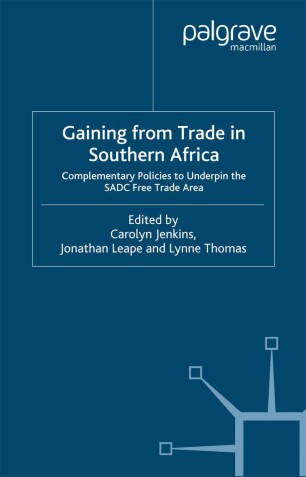 Policy-makers in Southern Africa are increasingly convinced that regional trade liberalization can improve growth performance and stimulate development throughout the region. To succeed where previous attempts have failed, however, governments must address two key issues. The first of these is policy coordination - the broad range of domestic policies must be made compatible with the proposed trade reforms. The second is institution building - concerted attention must be devoted to strengthening weak institutions and infrastructure. The contributors are among the leading authorities on regional integration in Africa.

JONATHAN LEAPE is founding Director of the Centre for Research into Economics and Finance in Southern Africa at the London School of Economics and Lecturer in Economics. He has undertaken numerous studies of economic and financial policy issues facing South and Southern Africa and has acted as consultant for a wide range of institutions.