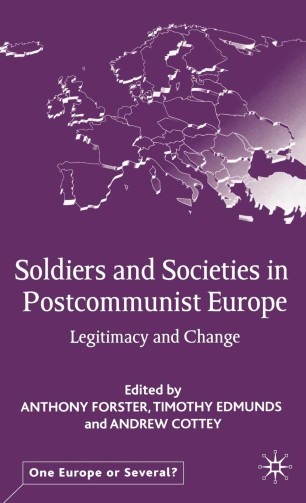 Soldiers and Societies in Postcommunist Europe

Part of the One Europe or Several? book series (OES)

This major comparative study examines the development of military-society relations in central and eastern Europe since the collapse of communism. Soldiers and Societies in Post-Communist Europe explores how the interaction of the common challenges of postcommunism and the diverse circumstances of individual countries are shaping patterns of military-society relations in this changing region. Detailed country case studies, written by international experts to a common analytical framework, compare the experiences of Poland, the Czech Republic, Slovakia, Hungary, Latvia, Lithuania, Romania, Bulgaria, Slovenia, Croatia, Yugoslavia and Ukraine.

'[This book] provides well researched analyses of the diverse ways in which the individual countries of the CEE region have evolved new perspectives and norms of military legitimacy during a period of dramatic change...anyone serving in a CEE country or working with staff officers or troops from this region would do well to dip into this volume.' - Peter Williams, The British Army Review