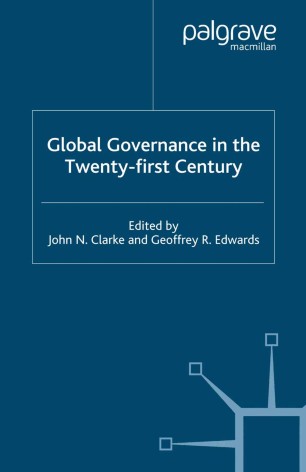 Global Governance in the Twenty-first Century

The key challenges of globalization are diffuse and outside the control of any one state. In its most ambitious and forward looking form, global governance seeks to create an international social fabric, albeit imperfect, which cumulatively, amounts to more than the sum of its parts. Global Governance in the Twenty-first-century aims to open a number of new areas for further analysis, and in particular, to begin a process of cross-fertilization between different disciplines examining issues related to global governance.

JOHN AGNEW is Professor of Geography at UCLA, Los Angeles CA, USA. He is the author and co-author of a number of books on international political economy and geopolitics including Geopolitics: Re-Visioning World Politics; Mastering Space: Hegemony, Territory and International Political Economy (with Stuart Corbridge) and The Geography of the World Economy (with Paul Knox and Linda McCarthy). JOHN N. CLARKE is Humanitarian Liaison Officer in the Bureau for Crisis Prevention and Recovery (United Nations Development Programme, New York) and Post-Doctoral Fellow, Yale University. He has previously served as an Advisor in the Early Warning and Contingency Planning Unit of the Office for the Coordination of Humanitarian Affairs (OCHA) at United Nations Headquarters, New York. From 1999-2000, he served as a Policy Advisor to Canada's then Minister of Foreign Affairs, the Hon. Lloyd Axworthy. He completed a PhD in International Relations at Peterhouse, Cambridge University, UK. MICHAEL W. DOYLE is Harold Brown Professor of United States Foreign and Security Policy, Professor of Law, and Professor of International and Public Affairs at Columbia University prior to which he was Edwards S. Sanford Professor of Politics and International Affairs, Princeton University (1987-2003). He has served as Assistant Secretary-General and Special Advisor to United Nations Secretary-General Kofi Annan, (2001-2003) and is a Fellow of the American Academy of Arts and Sciences. GEOFFREY R. EDWARDS is Reader in European Studies and Jean Monnet 'Chair' in Political Science in the Centre of International Studies, University of Cambridge, and a Fellow of Pembroke College, Cambridge. He formerly worked for a number of think tanks, including the RIIA (Royal Institute of International Affairs), Chatham House, having begun his career after taking his doctorate at the London School of Economics, in the Foreign & Commonwealth Office. He has written extensively on the European Union, its institutions and its external policies. MERVYN FROST is Chair of International Relations at the University of Kent at Canterbury. His major publications are: Towards a Normative Theory of International Relations, Ethics in International Relation and Constituting Human Rights: Global Civil Society and the Society of Democratic States. FEN OSLER HAMPSON is Director of the Norman Paterson School of International Affairs, Carleton University, Ottawa, Canada and Professor of International Affairs. Since 1994 he has been a senior consultant to the United States Institute of Peace, Washington, DC. He is co-editor (with David Malone) of a new volume entitled: From Reaction to Confiict Prevention: Opportunities for the UN in the New Millennium and author (with Jean Daudelin, John B. Hay, Todd Martin and Holly Reid), Madness in the Multitude - Human Security and World Disorder. RONNIE D. LIPSCHUTZ is Professor of Politics and Associate Director of the Center for Global, International, and Regional Studies at the University of California, Santa Cruz. His most recent books are After Authority - War, Peace and Global Politics in the 21st Century and Cold War Fantasies: Film, Fiction and Foreign Policy. He is also the author of Global Environmental Politics: Power, Perspectives, and Practice, a critical text on global environmental politics. ROBERT A. PASTOR is Vice President of International Affairs, Professor, and Director of the Center for Democracy and Elections Management at American University in Washington, DC. From 1985-98, he was Fellow and Founding director of several programs at The Carter Center and is the author or editor of 15 books, including A Century's Journey: How the Great Powers Shape the World, and Toward a North American Community: Lessons from the Old War for the New. DAVID SCHNEIDERMAN is Associate Professor of Law at the Faculty of Law, University of Toronto. He has edited several books, including The Quebec Decision; Charting the Consequences: The Impact of the Charter of Rights on Canadian Law and Politics (with Kate Sutherland) and Social Justice and the Constitution: Perspectives on a Social Union for Canada (with Joel Bakan). He is founding editor of the quarterly Constitutional Forum Constitutionnel and founding editor-in-chief of the journal Review of Constitutional Studies. He is completing a book manuscript entitled Investing Authority: The Constitutional Order of Economic Globalization. GEOFFREY R. D. UNDERHILL is Chair of International Governance at the Universiteit van Amsterdam. His research has focused on the political economy of trade and industrial adjustment across a range of developed economies as well as patterns of international co-operation for the regulation and supervision of global financial markets, and the impact of regulatory change in financial markets on the global monetary system and the wider economic development process. His most recent publication is an edited collection (with Xiaoke Zhang) International Financial Governance under Stress: Global Structures versus National Imperatives. GRAHAM WARD is Professor of Theology, University of Manchester and for the last six years has served as the senior executive editor of the Oxford University Press journal Literature and Theology. His book, Cities of God treats the postmodern situation and the inadequacy of certain older forms of theological discourse on the character and significance of the city with respect to that situation. It then attempts to construct a new way of doing theology from within the postmodern context that challenges some of the key assumptions and trajectories of postmodernity, but without either standing counter-culturally against it or being irrelevant to it.