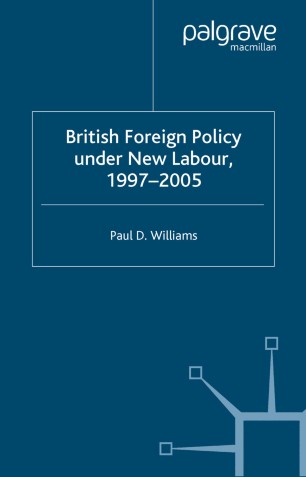 This important new study provides a critical analysis of the foreign policies conducted during the first two terms of Tony Blair's government. It focuses upon the government's key foreign policy commitments; three of its most important international relationships (with the US, the European Union, and Africa); and how Blair's government dealt with five fundamental policy issues (political economy, defence, international development, intervention, and Iraq). It argues that throughout this period Labour's foreign policies attempted to paper over some important contradictions.

PAUL D. WILLIAMS is Senior Lecturer in Security Studies, University of Birmingham, UK. His main research interests are British foreign policy and international peacekeeping. He is co-author of Understanding Peacekeeping and co-editor of Africa in International Politics and Peace Operations and Global Order.

'Let us not underestimate the importance of foreign policy to the New Labour project. The level of interest in the media and the priority accorded to security by public opinion are two indicators of the rise of foreign policy on the agenda of British politics. Hitherto, we have had to rely on accounts by journalists and commentators. Paul Williams' British Foreign Policy Under New Labour takes the analysis to another level. The book weaves a number of narratives through detailed empirical case studies, and in doing so is likely to appeal to an informed audience beyond the university sector. It will be the standard work on the statecraft of the first two Blair governments.' - Tim Dunne, Head of Politics, University of Exeter, UK

'Williams has provided a useful addition to the emerging literature on New Labour's foreign policy. It is critical, well structured and argumentative and deserves to be read by both students and scholars alike, being particularly strong on the defence and security aspects of British foreign policy in this period.' - Oliver Daddow in Political Studies Review