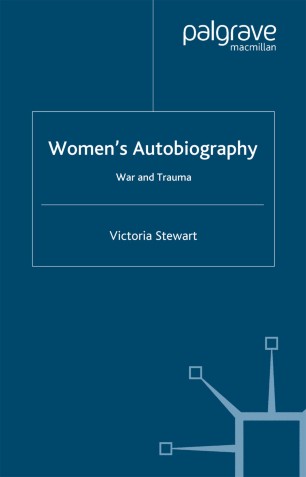 Examining a range of twentieth century writers, including Vera Brittain, Anne Frank and Eva Hoffman, this study focuses on how recent theories of trauma can elucidate the narrative strategies employed in their autobiographical writing. The historical circumstances of each author are also considered. The result is a book which provides a vivid sense of how women writers have attempted to encompass key events of the twentieth century, particularly the First World War and the Holocaust, within their life stories.

VICTORIA STEWART is a Senior Lecturer in the School of English at the University of the West of England, Bristol.

'Victoria Stewart's book, Women's Autobiography: War and Trauma , expands the current academic discourse in the field of trauma studies. Whereas a great deal of attention has been paid to memoirs of war and shellshock, Stewart focuses on more ambiguous and complicated autobiographical texts written by bereft noncombatants or victims of Nazi persecution, and sheds new light on war memoirs by Vera Brittain, Virginia Woolf, Anne Frank, Charlotte Delbo, and the children of Holocaust survivors. This is an incisive and compelling text that breaks new ground in its serious consideration of the kind of ineffable trauma and homelessness passed, as an unspeakable bequest, from parent to child in a classical scenario of torment unthinkable before the 20th century. Victoria Stewart offers a riveting examination of trauma and narrative reformulation in a century of unprecedented historical struggle.' - Suzette Henke, Morton Professor of Literature, University of Louisville, USA