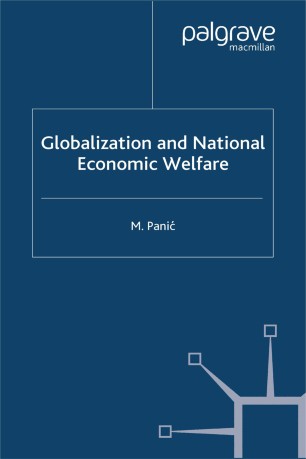 Globalization and National Economic Welfare makes an original, powerful and timely contribution to a highly topical issue that affects all countries by showing why globalization is unsustainable in the long term without fundamental changes in existing attitudes and institutions. The book analyzes one of the most important aspects of economic policy at the beginning of the twenty-first century: how to overcome the growing threat that inequalities created by globalization pose, both nationally and internationally, to economic progress and political stability. Economic problems, from corporate fraud and bankruptcies to the high social costs of the adjustments that globalization imposes on individual countries, are becoming increasingly international and, consequently, demand action at the supranational level. Yet the effective institutional framework for dealing with these problems remains national. In contrast to the neo-liberal approach, the author argues that the state, as the only form of organization that has the power to reconcile conflicts of interest nationally and internationally, has a critical role to play in ensuring that globalization does not end in failure and war.