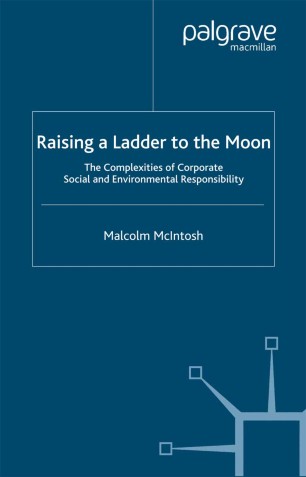 Raising a Ladder to the Moon

The Complexities of Corporate Social and Environmental Responsibility

Raising a ladder to the moon' is a metaphor that was used to describe the immensity of the task of laying the first trans-Atlantic telegraph cable at the end of the nineteenth century. It is used in this book to illuminate the challenges and opportunities that are inherent in the development of corporations as socially and environmentally responsible 'citizens' at the beginning of the twenty-first century. With reference to companies such as Macdonald's, Deutsche Bank, Coca-Cola, Royal Dutch / Shell, BP, Wal-Mart, and Unilever, Raising a Ladder to the Moon argues that in order to re-engage with the world, and solve some of the problems created by globalisation, we must re-see it. We must now see it in the light of its complexities. We have succeeded in creating social systems that create and destroy, that bind us together in common purpose and that set us against each other. Our corporations stand as monuments to our success at building social structures, but they are neither people nor machines. They are alive. They are complex, adaptive systems that can take on a life of their own. We need to embrace that complexity.