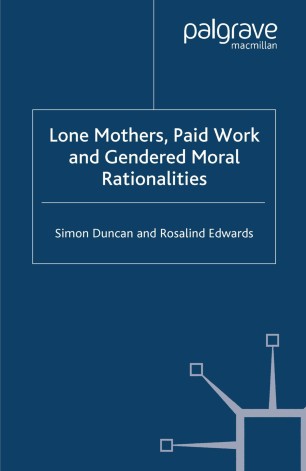 Why are most British lone mothers unemployed? And is 'welfare to work' the right sort of policy response? This book provides an in-depth analysis of how lone mothers negotiate the relationship between motherhood and paid work. Combining qualitative and quantitative data, it focuses on social capital in different neighbourhoods, local labour markets and welfare states. Criticising conventional economic theories of decision-making, it posits an alternative concept of 'gendered moral rationality', and sets up new frameworks for understanding national policy differences and discourses about lone motherhood.

SIMON DUNCAN is Reader in Comparative Social Policy at the University of Bradford. He has been appointed Hallsworth Fellow at the University of Manchester for 1998-99, is organiser of the ESRC seminar series on parenting, motherhood and paid work (with Rosalind Edwards), and is programme leader in the ESRC research unit of Care, Values and the Future of Social Policy. Major publications include Housing, States and Localities, The Local State and Uneven Development, Success and Failure in Housing Provision: European systems compared, The Diverse Worlds of European Patriarchy and Single Mothers in International Contexts.

ROSALIND EDWARDS is Reader in Social Policy at South Bank University. She is currently researching parenting and step-parenting after divorce/separation, and children's understanding of parental involvement in education. Major publications include Mature Women Students: Separating or Connecting Family and Education, Mothers and Education: Inside Out? (with M. David, M. Hughes and J. Ribbens), Single Mothers in an International Context: Mothers or Workers? (co-edited with S. Duncan), and Feminist Dilemmas in Qualitative Research: Public Knowledge and Private Lives (co-edited with J. Ribbens).