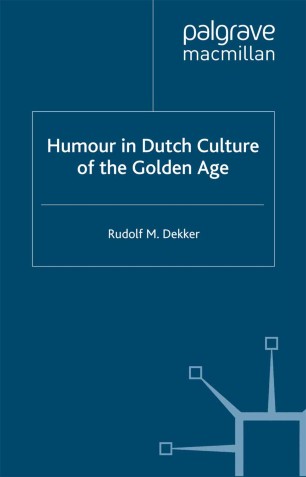 Humour in Dutch Culture of the Golden Age

The humorous side of Dutch culture of the seventeenth century is obscured by a change that took place around 1670. Religious treatises and books of manners warning against laughter contributed to a new image, that of the humourless, Calvinist Dutch. Mainly based on a manuscript with some two thousand jokes, the lost laughter of the Golden Age is reconstructed and analyzed. Most jokes are crude and obscene, and they throw new light on attitudes towards sexuality, religion and other aspects of life.

RUDOLF DEKKER is Reader in the Department of History and Art at Erasmus University in Rotterdam. His publications include Holland in Beroering and, with Lotte van de Pol, The Tradition of Female Transvestism in Early Modern Europe.

which can also be enjoyed by general readers. Written with a light touch, it

should do a good deal to undermine the myth of the humourless Dutch.' -

'Like all humour of the past, that of seventeenth-century Holland is utterly baffling: too obscure, too topical, too coarse by turns; then again startlingly recognizable, modern, universal. In this insightful analysis of the greatest treasure trove of early modern Dutch jokes, Rudolf Dekker has reconstructed the personalities, issues, virtues, and foibles that occasioned discrete smiles and guffawing laughter in the upper echelons of Dutch society. Dekker's comparative historical approach, which ranges well beyond the Netherlands, restores the currency and the flavour of humour in early modern Europe. He made me laugh, too.' - Mariët Westermann