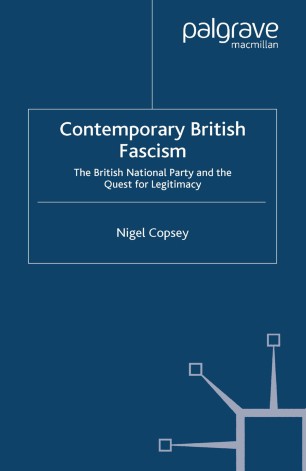 The British National Party and the Quest for Legitimacy

For the first time since the 1970s when the National Front became Britain's fourth largest political party, the recent electoral success of the British National Party has put Britain's extreme right back on the political map. Nigel Copsey provides a clear and comprehensive analysis of the history of the British National Party and its struggle for political legitimacy. With far-right parties enjoying unprecedented success across Europe, this book also locates its subject in the broader international context.

NIGEL COPSEY is Senior Lecturer in History at the University of Teesside. The author of Anti-Fascism in Britain, he has published widely on British right-wing extremism, fascism and anti-fascism.

'Nigel Copsey sets the BNP in historical and the contemporary European context...this is a timely book, and essential reading for anyone involved in combatting the BNP...It also has a clear message for the New Labour strategists who insist that radical hysteria over immigration can be pandered to just like any other issue.' - Richard McNeill Douglas, Red Pepper

'This book is essential reading for the journalists of Britain's quality press and media who cover the BNP, and for all academics concerned with the ways in which illiberal forces of ethnocentrism are able to adaptto and be hosted withincontemporary liberal political and civic space'. - Roger Griffin, Patterns of Prejudice

'Copsey provides a detailed study of the British National Party from its origins in 1982 under John Tyndall to its attempt to modernise under Nick Griffin from 1999'. - Sage Race Relations Abstracts