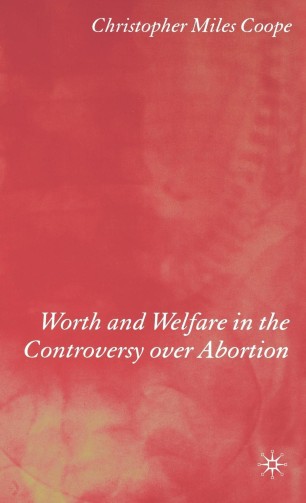 This book addresses the controversy over abortion. Covering interesting topics, including the claim that certain items (paintings, people) have 'intrinsic value' and should not be destroyed; the thought that young human beings do not have a good of their own; and the question whether the objection to murder turns on the violation of right to life.

CHRISTOPHER COOPE is Lecturer in Philosophy at the University of Leeds, UK. He has published in numerous academic journals on issues of and justice and medical ethics.

'This is an issue that most people do not wish to discuss...The debate is not much better at an academic level where the issues are often addressed to audiences who have already decided the matter and are looking only for high-calibre ammunition. In the context of this dearth of quality discussion about abortion, Christopher Coope's book is exceptional...This is not an easy book, but it opens up a significant avenue of philosophical reflection on an issue where rational progress has been sadly lacking.' - The Tablet

'Coope's book is, fundamentally, an extended and extremely acute piece of conceptual analysis, aided by an impressive mastery of the philosophical literature.' - Joseph Shaw, The Philosophical Quaterly