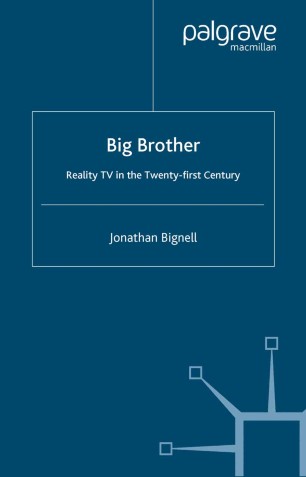 Reality TV in the Twenty-First Century

Jonathan Bignell presents a wide-ranging analysis of the television phenomenon of the early twenty-first century: Reality TV, exploring its cultural and political meanings, explaining the genesis of the form and its relationship to contemporary television production, and considering how it connects with, and breaks away from, factual and fictional conventions in television. Relationships with surveillance, celebrity and media culture are examined, leading to an appraisal of the directions that television culture is taking in the new century. His highly-readable style is accessible to readers at all levels of Culture and Media studies.

Jonathan Bignell is Professor of Television and Film at the University of Reading, UK. He works on the history and analysis of television, especially television drama in the UK and USA, using archival sources and the detailed analysis of programmes. Recent publications include An Introduction to Television Studies (3rd editon, 2012), Beckett on Screen: The Television Plays (2009) and A European Television History (co-edited with A. Fickers, 2008)

'Jonathan Bignell challenges traditional notions of the transnational flow of program material as he discusses reality television and deftly shows the links between reality television and the other television forms to which it is related as well as the genesis of the format in the new, multi-channel television environment. This book is a welcome addition to the study of reality television that will be accessible to undergraduate and graduate students in media studies and cultural criticism alike.' - Ronald J. Compesi, Professor, Broadcast and Electronic Communication Arts Department, San Francisco State University, USA