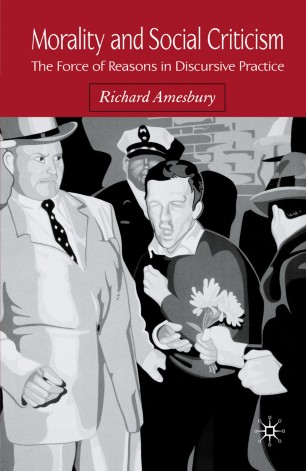 The Force of Reasons in Discursive Practice

In this book, Richard Amesbury brings recent developments in Anglo-American philosophy into engagement with dominant currents in contemporary European social theory in order to articulate a pragmatic account of moral criticism. Presented in a lively and accessible style that avoids technical jargon, Morality and Social Criticism argues that the objectivity of moral discourse can be preserved without recourse to the overweening philosophical ambitions of the Enlightenment.

“Richard Amesbury has produced an excellent book ... . Amesbury’s central project is to preserve –- as Rorty’s pragmatism self-admittedly cannot –- the rationality of radical criticism within the spheres of moral, political and religious thought and action. In doing this he finds himself confronting issues that relate quite generally to the nature of rationality and these he takes to be linked inextricably to the philosophy of language and to be fundamentally logical. It is this that gives Amesbury’s book a much wider appeal than that of most books of its size on social philosophy. Its critical momentum is grounded on a conception of rule-following behaviour which gives primacy to normative practices, which in some sense, lie at the roots of human beings’ actions and, thus, of human societies.” (Guy Stock, Philosophical Investigations, Vol. 31 (4), 2008)

“Amesbury ... provides a solid reconstruction of recent attempts in continental philosophy to theorize in a nonfoundational way about the status and function of social norms. He takes a middle ground between the strongly universalizing theory of discourse ethics (Habermas) and the rejection of universality represented by deconstruction (Derrida and to some extent Rorty). Norms are thus neither platonically ahistorical nor mere contingent posits. With the help of Robert Brandom's recent pragmatic account of norms, Amesbury argues that they are implicit in practices; the philosophical task is simply to make them explicit. Thus he avoids the regress of norms found in a position he calls "regulism." But he does think that no ethical reasoning can be done without a backdrop of certain moral commitments about which "doubts do not ordinarily arise." This is the key assumption of his "ordinary realism." The hope is that such a realist model of reasoning about norms can lend strong support to critique of problematic norms in a society. The book is accessible to those who have a modicum of background in contemporary continental ethics, but experts will garner much from it as well.” (James C. Swindal, Choice, Vol. 43 (5), 2006)