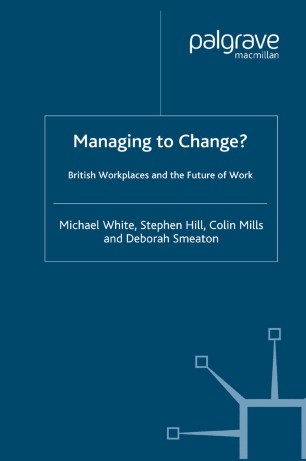 British Workplaces and the Future of Work

Part of the The Future of Work Series book series (TFW)

This book presents new and authoritative evidence about change at the workplace, using it to cast light on recent debates about the future of work. The basic questions it poses are whether, and how, British workplaces are responding to the challenge of change, and what are the implications of change both for managers and employees. Using up-to-date information from 2000 workplaces, it provides a realistic basis for envisaging the changes through the first decade of the 21st century. It is accessible to a wide audience of policy makers, managers, professionals, students and academics.

MICHAEL WHITE founded the Employment Studies Group at the Policy Studies Institute, University of Westminster, where he is now Emeritus Fellow. He is author of Against Unemployment (1991) and co-author of Restructuring the Employment Relationship (1998).

STEPHEN HILL has been Principal of Royal Holloway, University of London since 2002. Before that he was Deputy Director of the London School of Economics and Political Science. He has published a number of books on social theory and the sociology of employment and is co-author of The Penguin Dictionary of Sociology (1984, 1988, 1994, 2000). He was editor of The British Journal of Sociology between 1996 and 2002. His current research interests include: Work, technology and organizations; quality management; human resource management; and the future of work.

DEBORAH SMEATON is a Research Fellow at the Policy Studies Institute. Her research experience and publications span a variety of areas including gender studies, self-employment, older workers and change in the workplace.

'The first in a major new series on the future of work by Palgrave Macmillan, this book provides compelling evidence of the value of systematic research rather than the speculation and futurology that once dominated this vitally important subject. It is sure to have a major impact on the character of contemporary policy debate.' - Professor Peter Nolan, Director, ESRC Future of Work Programme

'[Managing To Change?], written by four leading employment experts, is an impressive and comprehensive analysis of the forces of workplace change in Britain.' - Richard Donkin, Financial Times

'One of the most vivid portraits of contemporary work that has been published in the past year or two.' - Stephen Overell, Personnel Today