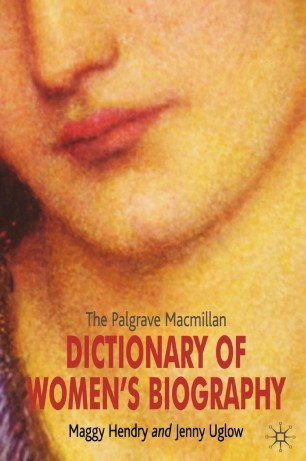 The Palgrave Macmillan Dictionary of Women's Biography contains details of the lives of over 2100 women from all periods, cultures and walks of life - from queens to TV chefs, engineers to stand up comics, pilots to poisoners. With subsections for further reading, comprehensive subject index and a bibliographical survey, this dictionary of women's biography is an invaluable reference source.

JENNY UGLOW's latest book is A Little History of British Gardening. Her previous book, The Lunar Men, won the Hessell-Tiltman Prize for History in 2003. Her biography of William Hogarth was published in September 1997 and was shortlisted for the Whitbread Biography Award. She writes and reviews for, amongst other publications, The Guardian, The Times Literary Supplement and The Independent on Sunday.

MAGGY HENDRY taught in Ghana, and travelled in India gaining insights into the struggles of women who often risk their lives for their beliefs. On her return she worked voluntarily in an information exchange for women worldwide. She has a degree in African Studies, has written educational books for Africa and worked on several biographical encyclopaedias. She is currently working on a new biographical encyclopaedia and a historical novel.

'Kylie, Nigella Lawson and J K Rowling are in. So are Tracey Emin and Paula Radcliffe. Yoko Ono and Meryl Streep, after years of neglect, are also included for the first time.The high-achieving women are all new additions to the fourth Dictionary of Women's Biography, which collates the lives of more than 2,000 females whose influence in politics, music, media, society, government and the media has been immense.' - Sally Pook, The Saturday Telegraph

'Any serious attempt to list women of achievement both living and dead is a cause for celebration.' - Janet Street Porter, Independent on Sunday

'The latest update of the authoritative Dictionary of Women's Biography gives an intriguing glimpse into how female high achievers have fought for recognition in a man's world over the past five years.' - Paul Majendie, Reuters Entertainment News

'Idiosyncratic and highly readable, the new edition of this chunky paperback brings together more than 2000 women of influence from politics, the arts, science, religion and adventure...often, its the lesser-known characters whose lives are most compelling - women like Eileen Wani Wingfield and Eileen Kampakuta Brown, septuagenarians who campaign against nuclear dumping in Australia.' - Mail on Sunday