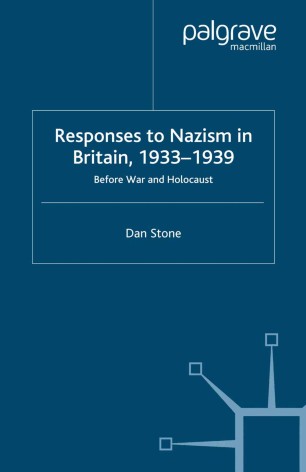 Before War and Holocaust

This book examines the large and previously-neglected body of literature on Nazism that was produced in the years 1933-1939. Shifting attention away from high politics or appeasement, it reveals that a remarkably wide range of responses was available to the reading public. From sophisticated philosophical analyzes of Nazism to pro-Nazi apologies, the book shows how Nazism informed debates over culture and politics in Britain, and how before the war and the Holocaust made Nazism anathema it was often discussed in ways that seem surprising today.

DAN STONE Professor of Modern History at Royal Holloway, University of London, UK. He is the author of Breeding Superman: Nietzsche, Race and Eugenics in Edwardian and Interwar Britain (Liverpool University Press, 2002) and Constructing the Holocaust: A Study in Historiography (Vallentine Mitchell, 2003).

'The responses to Nazism in Britain before 1939 were many and varied. The Right, as Nicolson said in July 1939, found it easier, in the interests of cerebral comfort, 'to regard Nazi Germany as a bulwark against Bolshevism than to confront her as a menace to our Empire and our independence' (189). Compelling reading - and should be compulsory for students of the history of the 1930s.' Deborah Vietor-Englander, Technical University of Darmstadt, Germany

'In terms of both its content and its approach Responses to Nazism covers new and/or neglected territory and in particular provides fresh and important insights into the political culture of the right in inter-war Britain. Stone begins with an analysis and contextualization of the work of a number of largely forgotten authors; the writings of people like Franz Borkenau and Aurel Kolnai are rescued from the 'enormous condescension of posterity'. He moves on to examine how British thinkers constructed and responded to the place of war and antisemitism in Nazi thinking.' E. H. H. Green, Magdalen College, University of Oxford, UK

'For those of us with an interest in anti-fascism, it further confirms that our subject is greatly variegated. Stone is right: it is surely time for historians 'to temper their fascination for the activities of British fascists with an understanding of how that fascism was combated'- in print.' Nigel Copsey, University of Teeside, UK 'Superbly written and impressively meticulous from updated preface to expansive references Responses to Nazism in Britain deserves attention by all students of interwar Britain and Nazism. Charting the years just before WWII right across the political spectrum, Stone effectively demonstrates that British perceptions of Nazi Germany ranged far wider than simple political 'appeasement' or ideologically naiveté. Highly recommended!' - Matthew Feldman, University of Northampton, UK 'The view the British public took of Hitler and National Socialism in the 1930s is critical for understanding Britain's later decision to fight Germany through six hard years of war. Dan Stone's study of British responses has established itself as the indispensable text on the complex, sometimes ambivalent reaction to fascism and the best starting point for anyone who wants to know why fascism never took root in Britain.' - Richard Overy, University of Exeter, UK