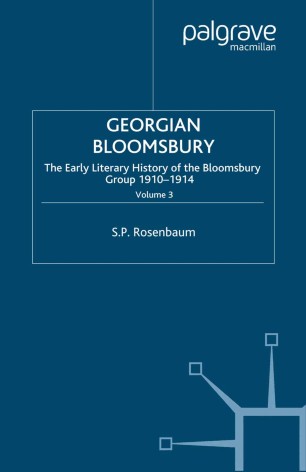 Georgian Bloomsbury completes the literary history of Old Bloomsbury that began with Victorian Bloomsbury (1987) and continued with Edwardian Bloomsbury (1994). Covering the years between the First Post-Impressionist Exhibition and The First World War, the book describes and analyzes interrelated literary works by Roger Fry, Desmond MacCarthy, Clive Bell, E.M. Forster, Lytton Strachey, Leonard Woolf, and Virginia Woolf. The works considered include fiction, criticism, essays, and polemics as well as autobiography, journalism and literary history that members of the Bloomsbury Group wrote between 1910 and 1914.

S.P. ROSENBAUM is Professor Emeritus of English Literature at the University of Toronto and a Fellow of the Royal Society of Canada. He is a literary historian and author of Victorian Bloomsbury (1987) and Georgian Bloomsbury (1994), the first two volumes of the literary history of Old Bloomsbury. He is the editor of Aspects of Bloomsbury: Studies in Modern English Literary and Intellectual History (1998). He has also edited A Bloomsbury Group Reader, Virginia Woolf's Women and Fiction: The Manuscripts Versions of 'A Room of One's Own' and The Bloomsbury Group: A Collection of Memoirs and Commentary (revised edition, 1995).

'A subtle and powerful picture of the Bloomsbury group, showing clearly what has been vague - their beginnings in the Victorian era before 'human characters changed' (as Virginia Woolf said). S.P. Rosenbaum is an unparalleled interpreter of the philosophical as well as literary tradition absorbed by this group.' - Richard Ellman

'Professor Rosenbaum has written a wonderful account of the ideas and people who were the early influences on the Bloomsbury Group... This book will be of interest not only to anyone fascinated by the Bloomsbury Group, but also to students of Woolf or Forster or Keynes or Strachey who need to know the background of these writers'. - Carolyn Heilbrun

'Rosenbaum's main purpose is to trace the ancestry and emergence of Bloomsbury's literary forms. Treating the group as a whole, he aggregates and analyses a body of information on their families and houses, on Cambridge literary and philosophical education, and on their early writings. It is a thorough and useful study.' - Raymond Williams

'If you want to deconstruct Bloomsbury, this is not the book for you; but if you want Bloomsbury consolidated, you can't do with it ... Rosenbaum is providing an impressively thorough and reliable map of the group development and achievements.' - Hermione Lee

'What impresses is not only the plethora of texts that Rosenbaum confronts but also his combination of broad perspectives with telling detail... Edwardian Bloomsbury is a significant work, authoritative and original, whose massive scholarship will fertilize discussion for many years to come.' - Frances Spalding

'This is the second volume of a formidable enterprise, and part of a series of publications by the same author that may entitle him to the position as the leading scholar of the Bloomsbury Group.. The greatest contribution that this study makes is in its splendid discussion fo the comparatively unknown writings of Bloomsbury, the short works, mostly essays and reviews, that Bloomsbury wrote in its apprenticeship...(Georgian Bloomsbury) is eagerly awaited.' - Peter Stansky