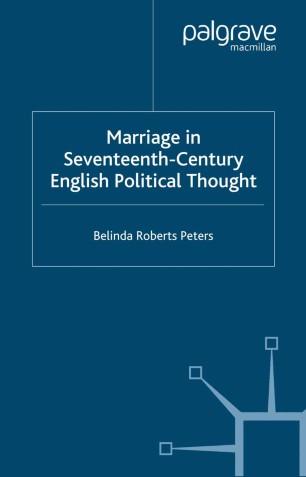 This study traces the decline of marriage as a metaphor for political authority, subjection, and tyranny in Seventeenth-century political thought. An image that bound consent and contract with divine right absolutism, and irrevocably connected royal prerogatives with subjects' liberties, its disappearance in the middle decades of the century coincided with the full emergence of patriarchalist and social contract theories. If both these accepted the importance of 'fathers of families', neither would suggest that political government could be comparable to 'marriage'.

BELINDA ROBERTS PETERS received her PhD in history from the University of California at Irvine in 1996, and taught courses in European culture and society, gender, and women's history at several southern California colleges, including California State University at San Marcos. She is beginning a project on seventeenth-century women's autobiography.