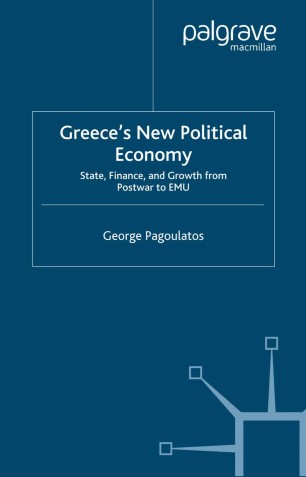 State, Finance, and Growth from Postwar to EMU

Greece's New Political Economy traces the course of Greece from a postwar developmental state to its current participation in the Euro-zone. Taking an innovative comparative approach, George Pagoulatos examines the political economy of financial interventionism and liberalization, banking politics, relations between the government and central bank, the winners and losers of financial reform, the effects of globalization and EMU and the implications of the new economic role of the state. This book will be an indispensable reference work for anyone seeking to understand the Greek political economy in the light of major contemporary debates.

GEORGE PAGOULATOS holds degrees in law, sociology and politics from the University of Athens and the University of Oxford, where he was a Rhodes scholar. He was a postdoctoral fellow of Princeton University and is now Assistant Professor of Politics at the Athens University of Economics and Business.

'...A unique contribution that sets very high standards in what is really a new area within scholarship on modern Greece...The author integrates a lot of important but often inaccessible material, and is well versed in macroeconomics...The book's superb analysis of the changing political contexts of economic development in post-Second World War Greece does remind the reader that there is much more to developmental/ financial regime changes than much of formal political economy theorizing is willing to acknowledge. This book is a 'must read' for students of economic development in the European periphery.' - Yannis M. Ioannides, Professor of Economics, Tufts University, USA

'An artfully written account of the links between the world of finance and the world of politics. It offers both an elegant history of fifty years of Greek political economy and a compelling theoretical argument about the factors that make for changes and continuities in economic policy making everywhere...A lasting contribution to literatures on the politics of finance, the political economy of small states, and Greek politics.' - Professor Nancy Bermeo, Princeton University

'An excellent case-study of the gradual shift from a developmental state to a stabilization state, with persisting elements of clientelism: the story of Greece's Europeanization, beautifully written.' - Professor Loukas Tsoukalis, University of Athens

'Greece's New Political Economy is no isolated work on a small state. Rather, it speaks to the wider scholarship and makes Greece relevant to a wider audience interested in the new political economy...It is a work of the highest level of scholarship, it is innovative and it is topical.' - Professor Kevin Featherstone, European Institute, London School of Economics and Political Science