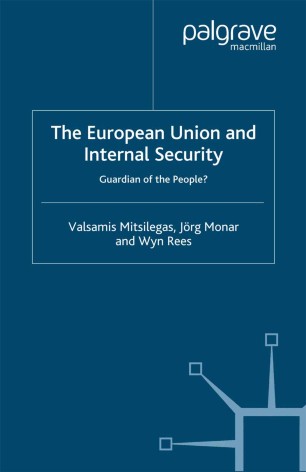 The European Union and Internal Security

Guardian of the People?

Part of the One Europe or Several? book series (OES)

In the post-Cold war period new security threats have arisen in Western Europe. Amongst these, organized crime and illegal immigration are acknowledged to represent significant security challenges. The European Union and Internal Security analyses the nature of these challenges and investigates how the EU has been evolving to counter them. Written by experts in the fields of political science and law, this book addresses a hitherto neglected area of study.

VALSAMIS MITSILEGAS has taught European Law at the Universities of Kent, Edinburgh and Leicester and EU History and Politics at Leicester. His publications include Money Laundering Countermeasures in the EU: A New Paradigm of Security Governance versus Fundamental Legal Principles.

JORG MONAR is Professor of Contemporary European Studies and Co-director of the Sussex European Institute. He is also a Professor at the College of Europe, Bruges and was formerly Professor of European Politics at the University of Leicester. His many publications include The European Union after the Treaty of Amsterdam (edited with W. Wessels).

WYN REES is Reader in International Relations at the University of Nottingham. He was previously a Senior lecturer at the University of Leicester. His publications include Reforming the European Union: From Maastricht to Amsterdam (edited with P. Lynch and N. Neuwahl).