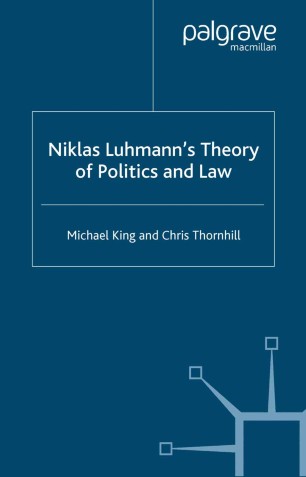 Niklas Luhmann's social theory stands in direct opposition to the dominant 'anthropocentric' traditions of legal and political analysis. King and Thornhill now offer the first comprehensive, critical examination of Luhmann's highly original theory of the operations of the legal and political systems. They describe how from the perspective of his 'sociological enlightenment' Luhmann continually calls to account the certainties, the ambitions and rational foundations of The Enlightenment and the idealized versions of law and politics which they have produced.

MICHAEL KING is Professor of Law at Brunel University, UK. He has held appointments at Warwick University and the State University of New York and has worked as a research fellow at the European University Institute, Florence. Recently, he has written extensively on autopoietic theory and its implications for the understanding of law.

CHRIS THORNHILL is Professor of German Political Theory at King's College, London. He is the author of several books on modern German legal and political thought.

Reviews of the Hardback Edition:

'This is an excellent book. Michael King and Chris Thornhill have provided a comprehensive, scholarly and accessible account of Luhmann's extensive writings on politics and law. They have also answered convincingly many of the 'anti-functionist' criticisms that have been directed against his ideas. I have no doubt that their efforts will succeed in convincing readers of the relevance and importance of Luhmann's theory in understanding the complexity and dynamism of modern society as well as the considerable difficulties which are likely to be encountered in attempting to find solutions to the major problems facing the world.' - Professor Gunther Teubner, J.W. Goethe University, Germany

'King and Thornhill have written an accessible introduction to Luhmann's theory. They focus on politics and law but also introduce the basic concepts of the general framework of systems theory. The book has many qualities, not least its language, which strive for clarity of expression. The authors seek to explain and strive to be understood. [I]n addition, King and Thornhill write with a welcome political edge. They spell out the political consequences of Luhmann's theory: the role of law in society, theories of legitimacy, concepts of democracy, the welfare state or the role of civil society in current life. The authors clearly understand how ambitious and far-reaching Luhmann's theory is meant to be. The book is therefore a very useful and recommendable introduction to its topic.' - Matthias Mahlmann, Freie Universität Berlin, in Journal of Law & Society