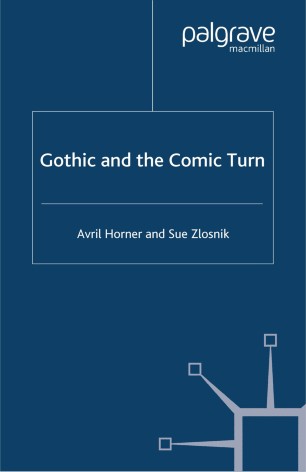 Gothic and the Comic Turn

Although Gothic writing is now seen as significant for an understanding of modernity, it is still largely characterized as a literature of fear and anxiety. Gothic and the Comic Turn argues that, partly through its desire to be taken seriously, Gothic criticism has neglected the comic doppelganger that has always inhabited the Gothic mode and which in certain texts emerges as dominant. Tracing an historical trajectory from the late Romantic period through to the present day, this book examines how varieties of comic parody and appropriation have interrogated the complexities of modern subjectivity.

AVRIL HORNER is Professor of English at Kingston University, London, UK. Her most recent book publication is the edited collection, European Gothic: A Spirited Exchange, 1760-1960 (2002), and she is currently working with Janet Beer on Edith Wharton: Sex, Satire and the Older Woman, to be published by Palgrave in 2006.

SUE ZLOSNIK is Head of the Department and Professor of English at the Manchester Metropolitan University, UK. She has published recently on George Meredith and Robert Louis Stevenson.

Together they have published Landscapes of Desire: Metaphors in Modern Women's Fiction (1990) and Daphne du Maurier: Writing, Identity and the Gothic Imagination (Palgrave, 1998) as well as numerous articles on Gothic fiction and women's writing.

'This is an ambitious and original book, the culmination of a project on which the authors have been working for a number of years. It will prove a real contribution to the study of the Gothic, not an easy topic about which to write in terms of comedy. The authors have found a new viewpoint, and they develop it with style and critical tact, and in a manner accessible to a wide readership.' - David Punter, Professor of English, University of Bristol