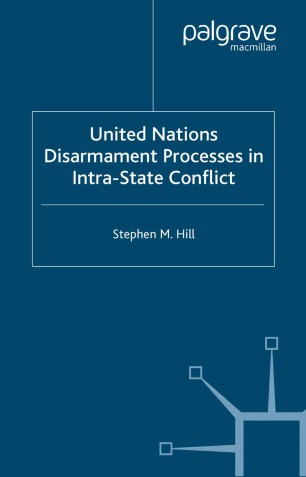 During the 1990s the United Nations was called upon to conduct unprecedented peacekeeping and humanitarian operations in order to bring peace to war-torn states. Essential to the resolution of these conflicts was deemed to be the disarmament of the former warring parties. United Nations Disarmament Processes in Intra-State Conflict therefore seeks to identify the most important lessons taught by the UN's experiences in disarmament and constructs an original analytical framework to explain the variation in the UN's success. On this basis Stephen M. Hill proffers recommendations for the UN's present and future disarmament operations.

STEPHEN M. HILL is an Assistant Professor of Political Science at the University of Wisconsin-Eau Claire, where he teaches courses in International Conflict, International Relations Theory and US National Security Policy. His publications include Peacekeeping and the United Nations (with Shahin P. Malik). He has also published several articles on issues related to peacekeeping, disarmament and conflict resolution.