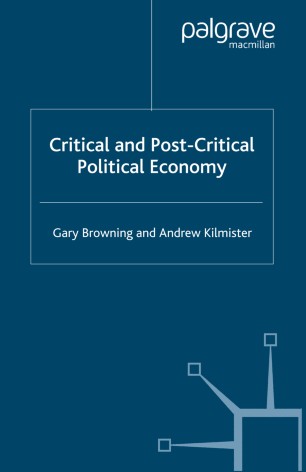 This book is original in focusing on critical political economy, identifying its character and reviewing its continuing legacy. In doing so it throws new light on Hegel and Marx and a range of subsequent theorist. It also develops a perspective on topics such as postmodernism, globalization, identity politics and the cultural turn.

GARY BROWNING is Professor of Politics at Oxford Brookes University, UK. His previous publications include Hegel and the History of Political Philosophy (1999) and Rethinking R.G. Collingwood: Philosophy, Politics and the Unity of Theory and Practice (2004). He is General Editor of the journal Contemporary Political Theory.

ANDREW KILMISTER is Senior Lecturer in Economics at Oxford Brookes University, UK. He has published articles on socialist models of development, economic transition in post-communist societies and concepts of restructuring. He is a member of the editorial board of Debatte: Journal of Contemporary Central and Eastern Europe.

'This imaginative and well crafted book contrasts the critical political economy of Hegel and Marx with post-critical thinkers such as Foucault, Negri and Baudrillard. Browning and Kilmister show there's life in the old dogs yet! This serious and scholarly text will excite and challenge readers - and remind them of the value of political economy in making sense of our own turbulent times.' - Frank Webster, Professor of Sociology, City University London, UK

'Browning and Kilmister offer a timely and cogent evaluation of the relationship between the political economics of Marx and Hegel and the cultural critique of selected 'post-critical' thinkers. Critical and Post-Critical Economy is a 'must read' for anyone concerned with the future of radical critique.' - Peter Case, Professor of Organization Studies, Bristol Business School, University of the West of England, UK

'Overall, the standard of critical discussion is extremely high and the central theme is robustly developed, resulting in a very fine book. It has two distinctive appeals: first, for those in the field of political economy who wish to connect their work with critical currents in modern social theory, and second, for modern social theorists who feel the need to connect more seriously with critical political economy.' - Lawrence Wilde, Contemporary Political Theory

'[This] book is a huge success; it contains a great deal of knowledge, it is written with admirable clarity and its argument deserves to be taken very seriously indeed.' - Nick Hewlett, University of Warwick, Political Studies Review