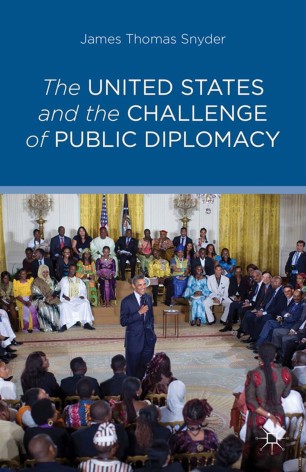 The United States and the Challenge of Public Diplomacy

Through personal experience and a lively narrative, this book examines the difficulty of communicating in adversarial environments like Iraq and Afghanistan, the complexity of multi-linguistic communications, and the importance of directing American cultural power in the national interest.

James Thomas Snyder is a former information officer for the United States and Canada at NATO.

"James Snyder's The United States and the Challenge of Public Diplomacy applies the perspective of a frontline public diplomacy practitioner to fresh new ideas for how the United States can talk more effectively with foreign publics. Snyder's proposals constantly 'cross the last three feet' - from the battlefield to the control room, the art gallery to the interpreter's box - as he finds creative ways to win international opinion to American policies and values. This is a must-read for public diplomacy policy makers and professionals wherever they are working." Robert Hunter, former US Ambassador to NATO and member of the National Security Council Senior Staff, USA

''The late Richard Holbrooke famously complained that the United States was being out-communicated by a group of insurgents in a cave in Afghanistan. Grappling with this central issue of how to get its message across in an age of multiple actors and globalized communications has been the central challenge for US public diplomacy in recent times. How can the US continue to inspire the world with its core values of individual freedom, democracy and liberal economics? As James Snyder argues in this indispensable guide, the answer lies in improving American public diplomacy, an area where in the past its performance has lagged behind its potential. All those concerned with American leadership in the 21st century will find much to learn from Snyder's insightful analysis. Policymakers and practitioners will also find his creative and practical ideas for improvement to be timely and important. I can only hope that they will also want to implement them as soon as possible. Snyder has rendered valuable service not only to public diplomacy but to US foreign policy more broadly.'' Dr. Jamie Shea, former NATO Spokesman and Director of Information and Press, Belgium