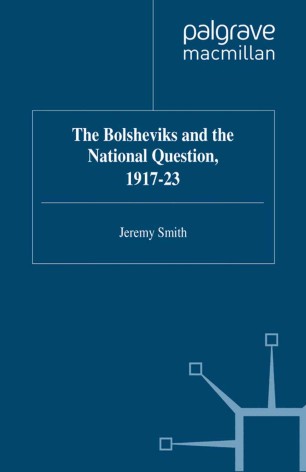 The Bolsheviks and the National Question, 1917–23

In a timely re-examination of the origins of the system which fell apart so dramatically in 1991, this book deals with the policies of the Soviets towards the non-Russian nationalities of the former Russian Empire. Making extensive use of previously unavailable material from the Soviet archives, Jeremy Smith explores the attempts of the Bolsheviks to promote the development of minority nationalities in the Soviet context, through a combination of political, cultural and educational measures, and looks at the disputes surrounding the creation of the Soviet Union.

Jeremy Smith is Lecturer in Soviet History at the Renvall Institute at the University of Helsinki.

"Jeremy Smith's valuable new book deals with the formulation of Soviet nationalities policy from the Bolsheviks' assumption of power in October 1917 to the definitive formulation of the policy of indigenization...." - The Russian Review

"This is a well-written study, solidly based on archival materials and the contemporary press. Smith adds significant details to the fascinating story of how Bolsheviks built expedient political alliances with the non-Communist nationalists who supported their program of cultural revival, while at the same time dealing with opposition to Moscow's centralizing program from "national Communists" in Georgia, Ukraine, and elsewhere." - American Historical Review