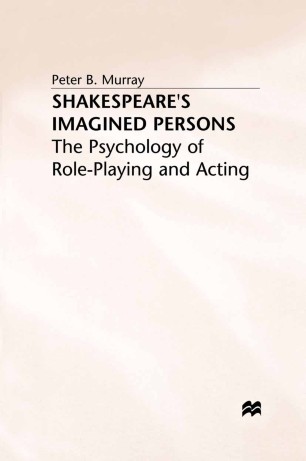 The Psychology of Role-Playing and Acting

Challenging our understanding of ideas about psychology in Shakespeare's time, Shakespeare's Imagined Persons proposes we should view his characters as imagined persons. A new reading of B.F. Skinner's radical behaviourism brings out how - contrary to the impression he created - Skinner ascribes an important role in human behaviour to cognitive activity. Using this analysis, Peter Murray demonstrates the consistency of radical behaviourism with the psychology of character formation and acting in writers from Plato to Shakespeare - an approach little explored in the current debates about subjectivity in Elizabethan culture. Murray also shows that radical behaviourism can explain the phenomena observed in modern studies of acting and social role-playing. Drawing on these analyses of earlier and modern psychology, Murray goes on to reveal the dynamics of Shakespeare's characterizations of Hamlet, Prince Hal, Rosalind, and Perdita in a fascinating new light.