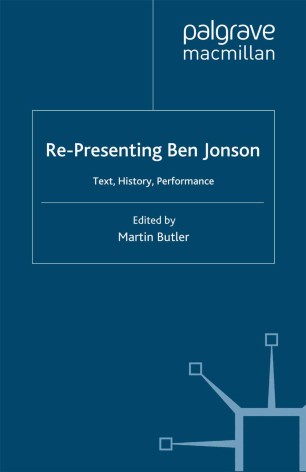 Work on Ben Jonson has long been dominated by the 11-volume Oxford text of his Works , edited by C.H. Herford, Percy Simpson and Evelyn Simpson (1925-52). In this monumental edition, Jonson seems a remote and forbidding figure, an author of formidable learning and literariness. This collection of essays by twelve leading scholars, editors, historians and bibliographers explores ways in which modern understanding of Jonson's texts has undermined the emphasis of the Oxford edition, and generated a Jonson whose Works and career look quite different. Addressing the competing needs of future readers, teachers and performers, it asks how this reconceptualized Jonson might best be transmitted into the next century. The volume also includes a new Jonson text, The Entertainment at Britain's Burse , written in 1609 to celebrate the royal opening of the Earl of Salisbury's commercial development in the Strand. Discovered in 1996, it is the most significant addition to Jonson's canon this century, and is here printed for the first time.