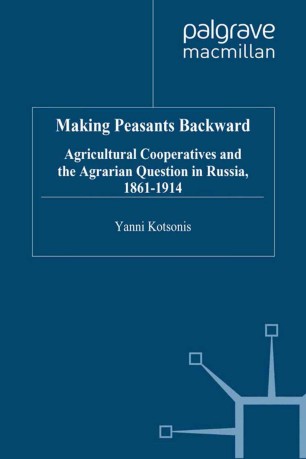 Agricultural Cooperatives and the Agrarian Question in Russia, 1861–1914

In this first monograph on the Russian cooperative movement before 1914, economic and social change is considered alongside Russian political culture. Looking at such historical actors as Sergei Witte, Piotr Stolypin, and Alexander Chaianov, and by tapping into several newly opened Russian local and state archives on peasant practice in the movement, Kotsonis suggests how cooperatives reflected a pan-European dilemma over whether and to what extent populations could participate in their own transformation.

YANNI KOTSONIS was raised in Athens, educated in Montreal, Copenhagen, London, and New York, and first taught history at the University of Essex (lecturer in Russian and Comparative history, 1993-94). He currently teaches European and Russian history at New York University, (Assistant Professor of History, Modern Europe and Russia, since 1994).

'In his original and imaginative book, Dr Kotsonis considers the rival projects for peasant reform in Tsarist Russia, and their impact on life and work of the peasants. The author argues that all these schemes, from the conservative to the radical left, assumed that the peasants were 'backward', and should be guided to a better progressive future. This was the root of their failure, of the peasants own attempt to modify the agenda. This study, based on a wide variety of new sources, will arouse much interest and controversy.' - Professor R.W. Davies, University of Birmingham

'This interesting book will provoke much controversy.' - Slavic Review

'This study presents succinctly...the clearest and most thorough explanation yet available in the West of the failure of those ostensibly responsible for the welfare of Russia's peasantry to assist them toward the progress enjoyed by many of their contemporaries in Western and Central Europe...This work is...a major contribution to augmenting our understanding of a crucial failure plaguing the troubled history of late Imperial Russia.' - Oliver Hayward, EH. NET