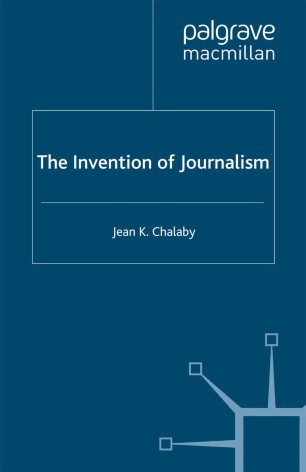 The Invention of Journalism

JEAN K. CHALABY studied sociology at the Universite de Lausanne, Switzerland, and at the London School of Economics, where he completed a PhD in 1994. He is currently Research Associate at the European Institute, London School of Economics. He has conducted research on the media in Eastern Europe and has published numerous articles on comparative journalism in leading European journals.

'This is a valuable study of the emergence of journalism as a discursive field during the mid to late-nineteenth century. Chalaby brings together a lot of previously dislocated argument in describing and explaining the formation of the genres of the contemporary press. The framework is primarily economic and he is able to bring into play the elements of capitalism and class division which have to be kept in motion in any analysis seeking to offer a general explanation for the way things are...All this makes sense and the highly structured account is enlivened by some interesting material from the papers themselves...Chalaby's analysis has a strongly social-scientific emphasis and looks deeply into the present. His book is part of the jigsaw of research into the media, its history and operation, directed from a variety of cultural locations...[T]his spirited study of the history and practice of journalism as discourse is an effective contribution to an understanding of the newspaper press in the modern period.' - Michael Harris, Media History