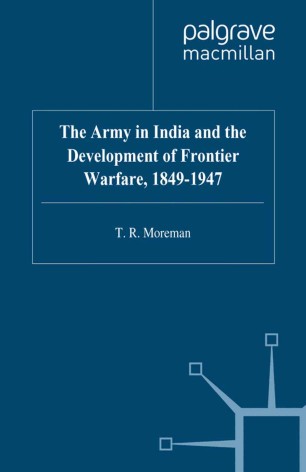 The Army in India and the Development of Frontier Warfare, 1849–1947

This comprehensive study is the first scholarly account explaining how the British and Indian armies adapted to the peculiar demands of fighting an irregular tribal opponent in the mountainous no-man's-land between India and Afghanistan. It does so by discussing how a tactical doctrine of frontier fighting was developed and 'passed on' to succeeding generations of soldiers. As this book conclusively demonstrates this form of colonial warfare always exerted a powerful influence on the organisation, equipment, training and ethos of the Army in India.

TIM MOREMAN is Lecturer in War Studies at King's College, London, where he has taught since 1990, including a six month period as acting resident historian at the Army Staff College at Camberley. He was educated at the University of Reading and took a first in Modern History and International Relations and then went on to complete both a MA and a PhD in War Studies. His main research interest is imperial military history, in particular focusing on the various 'small wars' and counterinsurgencies fought by the British armed forces in South and SE Asia since the end of the First World War.

'The best account yet of the development of warfare on the North-West Frontier of India.' - Peter B. Boyden, The Society for Army Historical Research

'Lucid, well organized and scrupulously fair, The Army in India and the Development of Frontier Warfare is a very welcome addition to the new-flourishing literature on the military history of South Asia.' - David Omissi, University of Hull

'...This work will profit anyone concerned with the study of doctrine or the British military experience in India.' - Lorenzo M. Crowell, Mississippi State University

'Scholarly and popular interest in the Raj continues, as does the production of still more books on it. Among the best is T.R. Moreman's The Army in India and the Development of Frontier Warfare 1849-1947...Those already knowledgeable, even expert will learn from Dr Moreman's perceptive, thorough and authoritative study. It will be a standard work for years to come, and is a 'must' for scholars, enthusiasts and serious students of British-Indian military history.' - The Journal of the Victorian Military Society

'a major contribution to the growing field of serious studies of the British military experience in India.' - Mark Jacobsen, Small Wars and Insurgencies