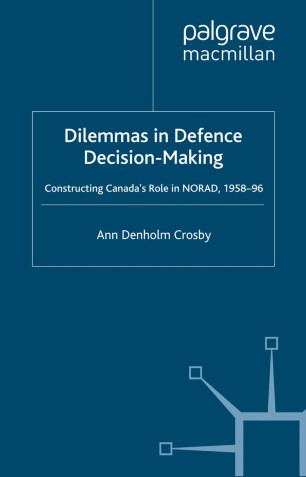 The Cold War produced a matrix of Canadian/US extra-governmental military and economic relationships which significantly shaped Canadian political decision-making as it related to the defence of the continent under the auspices of the North American Air/Aerospace Defence Agreement (NORAD). In the post-cold War era, these relationships continue to effectively support a traditional security agenda for the Canadian government. The rewritten NORAD Agreement, signed in March 1996, is the vehicle for Canadian participation in US missile defence programs worldwide. Paying particular attention to the decisions to adopt a nuclear weapons role for Canada's continental air defence forces, to test the US air-lunched cruise missile in the Canadian North, and to become increasingly involved in active missile and space-based defence programs, the author examines: · the Cold War construction of Canadian/US military and economic relationships · the effects of these relationships on political decision-making · the public discourse as a site of alternative understandings of Canada's role in the Cold War. Ann Denholm Crosby provides a challenging analysis of Canadian defence decision-making in both its Cold war and post-Cold War contexts.

ANN DENHOLM CROSBY is Associate Professor in the Political Science Department at York University, Ontario, and teaches in the fields of Security Studies, Canadian Foreign Policy and Peace Research.