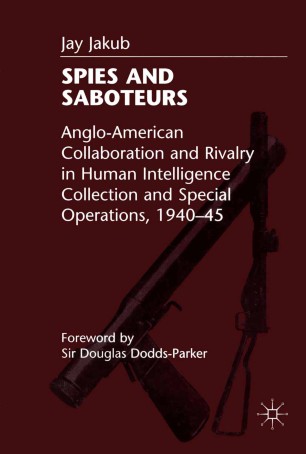 Spies and Saboteurs is the story of the origins of the Anglo-American 'Special Relationship' in human intelligence collection and special operations, which took place amidst the global conflagration that was the Second World War. It is the story of William 'Wild Bill' Donovan - the father of America's Central Intelligence Agency - and of his relationship with legendary British spymasters like William Stephenson, code named 'Intrepid', Stewart Menzies ('C'), chief of the Secret Intelligence Service, Admiral John Godfrey, the powerful and enigmatic director of Naval Intelligence, and General Colin Gubbins, Britain's master saboteur. Relying almost exclusively upon recently declassified OSS and British intelligence documents and survivor interviews, it examines the transatlantic association in espionage and sabotage, guerrilla warfare and disinformation. It explores the evolution of covert relations from a 'tutorial' arrangement with the U.S. as pupil, to an unequal then full partnership, and ultimately to competition and rivalry in the prosecution of the clandestine war.

JOSEPH F. JAKUB, III is an Oxford-trained intelligence historian, a former US diplomat, and is presently the Senior Investigator for International Affairs for a major US Congressional Committee, where he is leading a team investigating efforts by foreign governments to purchase US foreign policy. Spies and Saboteurs is his first book, but he has written extensively on a variety of international security and political issues for the US Government and for international journals. He is also collaborating with former KGB Colonel and British spy Oleg Gordievsky on a book about the present struggle for control of Transcaucasian oil resources. Whilst a member of the US diplomatic service, Dr Jakub received four exceptional performance awards for his work in helping to establish and support the new US Embassies in Central Asia and Transcaucasia after the collapse of the Soviet Union, and for his service during the Gulf War and the Romanian Revolution.