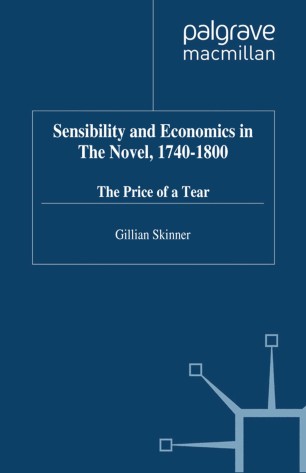 The Price of a Tear

Sensibility and Economics in the Novel argues that the sentimental novel, usually seen as a 'feminine' genre concentrating exclusively on emotional response, is in fact actively involved in contemporary economic and political debates. Spanning the period encompassing the rise, heyday and decline of sentimentalism, the book considers how the trajectory of the movement affected the sentimental novel's use of discourses of economics, sensibility and femininity, and assesses the impact of the pressures of the post-Revolutionary 1790s on these areas.

Gillian Skinner is Lecturer in English at LSU College of Higher Education in Southampton.

'Skinner's substantial book boldly takes on the common assumption that sentimental novels avoid the economic and political. We need not read those concerns into the novels, insists Skinner; they are already there to be read. Many examples are offered, but the most impressive is the reading of A Sentimental Journey. First-rate analyses of later novels pinpoint the particular features of sensibility that come to characterize commerce.' - Clifford Siskin, Studies in English Literature

'Gillian Skinner's Sensibility and Economics in the Novel makes an important and compelling contribution to the new economic criticism that has gained so much interest in our field in the last few years. [...] What distinguishes Skinner most prominently from many other treatments of economics and the novel is her attention to gendered authorship. Thus, instead of making claims about women writers with scant reference to their male counterparts or claims about the novel with scant attention to gender or women, Skinner shows how in several different ways the perspective of women writers can interestingly differ from that of their male contemporaries. In doing so, she makes an important contribution to the ongoing conversation about gender, fiction, and economics.' - Laura J. Rosenthal, Florida State University